With the benefit of hindsight, I can see another omission from Rationality Rules’ latest transphobic video. In his citations, he cites two sporting bodies: the International Association of Athletics Federations and the Australian Sports Anti-Doping Authority. He relies heavily on the former, which is strange. The World Medical Association has condemned the IAAF’s policies on intersex and transgender athletes as “contrary to international medical ethics and human rights standards.” The IAAF has defended itself, in part, by arguing this:

The IAAF is not a public authority, exercising state powers, but rather a private body exercising private (contractual) powers. Therefore, it is not subject to human rights instruments such as the Universal Declaration of Human Rights or the European Convention on Human Rights.

Which is A) not a good look, and B) false. If you won’t take my word on that last one, maybe you’ll take the UN’s?

As for the ASADA, Rationality Rules only invokes them when discussing Therapeutic Use Exemptions. I’ll have more to say on those later, but for now it’s enough to note two things. One, the ASADA currently has no guidance on transgender athletes, a strange omission given the central role they may play for transgender athletes. Two, why is a British citizen citing an Australian organization? The more relevant sporting body to consult is the World Anti-Doping Agency, which sets international standards for controlled substances like testosterone. Their policy on transgender athletes passes the buck, to some extent (spoiler alert!).

The individual sports federations and organizations need to decide on the eligibility of transsexual athletes in their sport, and a TUE will only be considered for eligible athletes. The hormones administered to MtF athletes (estrogen, anti-androgens) are not prohibited in sports. Only FtM athletes who take androgens require a TUE.

National and local organizations decide which transgender athletes are eligible to compete, and WADA themselves only place restrictions on transgender men. So RR should have cited British sporting agencies. Alas, there’s no over-arching policy on transgender athletes in that country; UK Sport, UK Anti-Doping, and the English Institute of Sport are all silent on the topic. We have to go to the local level, and policies there vary widely. The governing body for rowing in the UK requires HRT for MtF athletes, but not for FtM athletes, which is strange for a sport where muscle strength plays a significant role. The body for UK football suggests hormone therapy, but doesn’t make it an absolute requirement, again an odd choice if hormones play a significant role in sport performance. Roller derby doesn’t require any medical or legal verification at all, a strange choice given how physical it can be. So Britain is a bit of a mess, which is rather fitting, but it could be worse.

No person in the United States shall, on the basis of sex, be excluded from participation in, be denied the benefits of, or be subjected to discrimination under any education program or activity receiving Federal financial assistance.

That is Title IX, which became law within the USA in 1972. A lot of amateur sport happens at schools of all levels, which means the Feds have a lot of control over who gets to play and who doesn’t. Does discrimination on the basis of sex include discrimination on the basis of gender identity? The US legal community (mostly) says yes, Obama said yes, Trump said no, Betsy DeVos said the States will figure it out. 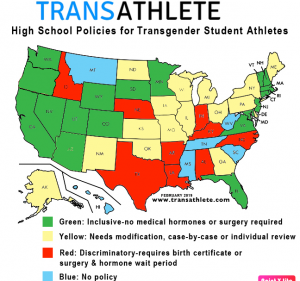 The States have not figured it out. Texas demands a birth certificate change, even if that leads to ridiculous outcomes. On the opposite end, New Jersey doesn’t require any evidence of transition, let alone proof of medical treatment. Alaska punted the question down to the school board level, and South Carolina has no policy. Thanks to the Christian far-Right’s newfound obsession with gender identity, and Title IX inadvertently turning transgender athletes into a political football, school-level athletic policy could charitably be described as a clusterfuck with no consensus.

(Incidentally, remember how Rationality Rules was heartbroken that some cisgender athletes lost against two transgender ones? Alliance Defending Freedom was equally outraged and launched a lawsuit on behalf of them, with the goal of rolling back Connecticut’s gender-inclusive policies. Isn’t it nice when YouTube atheists and Christian far-Right groups find common ground?)

Still, things aren’t entirely dour in the US of A. The National Collegiate Athletic Association plays a big role in US athletics, and their policy on transgender athletes is pretty good.

Transgender women display a great deal of physical variation, just as there is a great deal of natural variation in physical size and ability among non-transgender women and men. Many people may have a stereo-type that all transgender women are unusually tall and have large bones and muscles. But that is not true. A male-to-female transgender woman may be small and slight, even if she is not on hormone blockers or taking estrogen. It is important not to overgeneralize. The assumption that all male-bodied people are taller, stronger, and more highly skilled in a sport than all female-bodied people is not accurate.

Finally, fears that men will pretend to be female to compete on a women’s team are unwarranted given that in the entire 40 year history of “sex verification” procedures in international sport competitions, no instances of such “fraud” have been revealed. Instead, rather than identifying men who are trying to fraudulently compete as women, “sex verification” tests have been misused to humiliate and unfairly exclude women with intersex conditions. The apparent failure of such tests to serve their stated purpose of deterring fraud—and the terrible damage they have caused to individual women athletes—should be taken into account when developing policies for the inclusion of transgender athletes.

It’s more restrictive than some States, though, as the NCAA still requires all transgender athletes undergo hormone therapy. Other US national teams are similarly inclusive, such as USA Hockey and USA Tennis. The US Olympic Team allowed Chris Mosier to compete in 2016, which was no surprise as he was dominant in men’s duathlon.

We can’t possibly finish this post without a visit to my home country, Canada. The main ethics body for sports is the appropriately-named Canadian Centre for Ethics in Sport, and this infographic almost says it all. 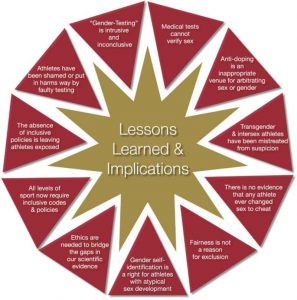 Almost. This paragraph from a more recent document condenses all of that into a policy.

“Individuals participating in any LTAD level in Canadian sport (FUNdamental, Learn to Train, Train to Train, Train to Compete, Train to Win and Active for Life) should be able to participate in the gender with which they identify and not be subject to requirements for disclosure of personal information beyond those required of cisgender athletes. Nor should there be any requirement for hormonal therapy, unless the sport organization can prove that hormone therapy is a reasonable and bona fide requirement and where this is the case, only require this at the high performance levels of Train to Compete and Train to Win where international rules become a factor.”

In sum, their stance is that medical treatment is only necessary to sync up with international rules. Alas, the CCES can only advise other sporting bodies, it lacks any ability to enforce policy; the very next slide after the text I quoted above lists some Canadian sporting agencies which have more restrictive policies than CCES’s. Still, the net trend is towards adopting the CCES rules.

There are two takeaways. First, Rationality Rules is honest about not being an expert on this subject, and he concludes:

[19:07] In some events – such as long-distance running, in which hemoglobin and slow-twitch muscle fibers are vital – I think there’s a strong argument to say no, [transgender women who transitioned after puberty] don’t have an unfair advantage, as the primary attributes are sufficiently mitigated. But in most events, and especially those in which height, width, hip size, limb length, muscle mass, and muscle fiber type are the primary attributes – such as weightlifting, sprinting, hammer throw, javelin, netball, boxing, karate, basketball, rugby, judo, rowing, hockey, and many more – my answer is yes, most do have an unfair advantage.

In comparison, all of the transgender policies I’ve quoted above were crafted by experts, with intimate knowledge of their sports and the full scientific record at their fingertips… and there’s no agreement whatsoever! Some require full-on surgery, others work on the honour system; some regulate the hormones of transgender men while ignoring transgender women, some do the reverse. Either RR has managed to outsmart hundreds of experts and discover a consensus obvious enough for a self-admitted layperson to spot, or he’s got one of the worst cases of Dunning-Kruger I’ve ever seen.

Second, with this wide variety of policies it’s trivial to cherry-pick the ones that are most aligned with your view. I could have easily just quoted the policies of the CCES and a few of the more liberal US states, and used that to argue transgender athletes lack an unfair advantage. That wouldn’t honestly capture the range of expert opinion on the matter, though.

Rationality Rules, in contrast, is happy to engage in another lie of omission and cherry-pick the policy of one sporting agency as if it was typical of them all. A policy that’s been criticized for ignoring human rights by medical experts and depends on shoddy science.

I’m honestly surprised anyone takes the guy seriously, given how oblivious and/or devious his arguments are.