I was reading some of Elon Musk’s claims from July, and marveling at how much he gets away with.

“Mars may be a fixer upper of a planet, but it has great potential!” the billionaire wrote.

User @PPathole responded, asking Musk what he believes is the “timeframe for creating a self-sustaining civilization” there.

“20 years? Self-sustaining meaning not relying/[dependent] on Earth for supplies,” he said.

I goggled at that exchange. Such blithe confidence! Where were those numbers coming from? He seems to believe plopping one million people (as if he could) onto the surface of Mars will trigger some miraculous auto-catalysis that will solve all the biological and engineering problems that he can’t even imagine. Throw enough people at this hostile world and they’ll figure everything out for him.

I don’t know that he actually believes in that. He seems to be an autonomous hype machine.

But then I wondered, are there actually people out there who listen to Musk and don’t constantly think, “that’s bullshit”? Are you one of them? I’ve never met a Musk true-believer, but if they exist at all, they’d be fascinating to have a conversation with…until it got too frustrating. Speak up! Explain in the comments how MuskMath works.

And finally, I wondered how a credible journalist could quote that claim without instantly raising objections (I know, it’s a Fox News link, so it’s a purely hypothetical credibility.) The commenters on that article, with a few exceptions, certainly are gung-ho, and amusingly, many are complaining that they are so old that 20 years is unattainable. Again, if you’re out there, explain here how you would support the claim. I know, it’s a bit like jumping into a shark tank, but hey, you’re the one who’d provide the math and engineering background.

As a starting point, let’s begin with a simpler example. You’ve been granted a large chunk of Antarctica as a gift (and a generous exception to international law), and have been able to lease a fleet of cruise ships, with a capacity of 5000 people each. You load them up, and make 200 trips from ports around the world, dropping them off on a rocky beach in Antarctica, along with tents and prefab buildings. How long until you have a self-sustaining colony that is sending profits back to you? How long until the distress calls go out and you have to rescue the survivors?

I’ve often wondered how, if erecting self-sustaining colonies is so easy, we haven’t been eagerly plundering our southern-most continent, which, while possibly a bit inhospitable, does have the little amenities of air and water, both lacking on Mars.

Shouldn’t we also consider the possibility that this is all an improbable fantasy of total civilian control by a breed of ignorant oligarchs, anyway? 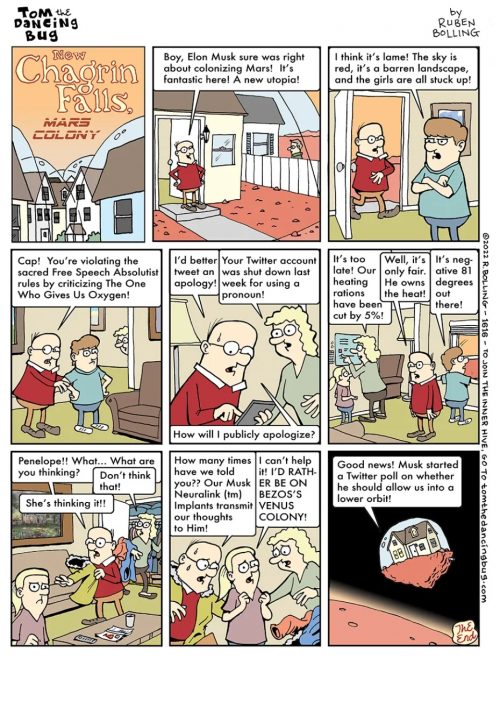 The Science Fair experience » « Oh no! Classes begin one week from today!