Back in the day when I was a naive young man, the news would occasionally run stories about the Future of Humanity, and predict where evolution was going to take us. It was usually a destiny of feeble, shriveled bodies and gigantic domed heads, but there were recent variants. Wall-E instead suggested humans were all going to become obese, trapped in motorized wheelchairs. Or look to Idiocracy, which instead predicts we’re going to be selecting for crass stupidity. You should realize that these are not scientific predictions at all, they are merely cautionary tales conjured up by creators who are telling us about themselves — that they find eggheads and fat people and stupid people repellent, for instance. It’s both ugly and unscientific, because no, evolutionary biologists are not going to make long term predictions about the trajectory of evolution, because selection is a short term and local process.

Are you ready for the next generation of inane predictions? Oh boy, they are at least going in a different direction. Behold Mindy, our destiny, if we continue to do things the artist doesn’t like very much. 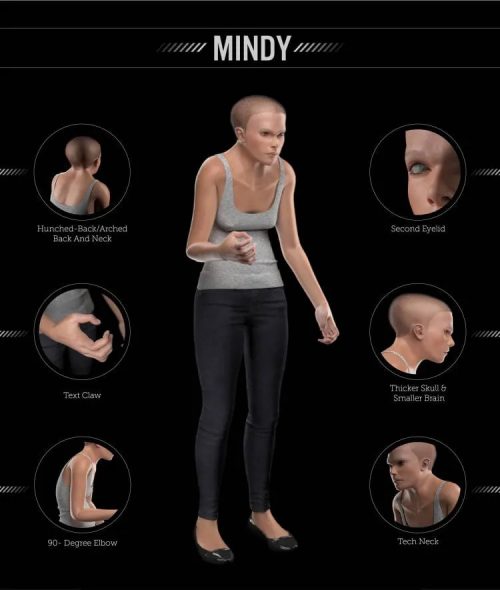 You might be wondering how they came up with this remarkable portrait. “Researchers” were commissioned to create a model.

Researchers worked with a 3D designer to create images of a “future human” that accounts for all of the problems long-term tech use may cause.

That does not explain who these “researchers” are. I read through the original source, and it seems to have been Professor Google. They rummaged around through various sites that complain about modern ills — I found some New Age sources, some crank medical sites, and some legit medical sources that talk about the perils of poor posture — and stitched them all together into a rationale for what evolution would favor, an invalid line of reasoning. It’s all entirely driven by contempt for people who use cell phones and do office work. As usual, it’s all about airing the creator’s ill-informed biases. So, if you look at your phone, you are warping the morphology of any progeny you might have! Stop it!

Researchers predict that office work and craning the neck to look at smartphones will lead to humans having a hunched back in the future. Currently, many people consistently adjust their position to look down at their phones, or to look up at their office screens.

If you sit in front of your computer, your grandchildren will grow up to be hunchbacks! At least, according to a holistic medicine guy.

Sitting in front of the computer at the office for hours on end also means that your torso is pulled out in front of your hips rather than being stacked straight and aligned,” says Caleb Backe, a health and wellness expert at Maple Holistics.

Using this logic, I guess if they’d hired “researchers” a hundred and fifty years ago to draw what humans would look like if we continued to employ chimney sweeps, they’d have predicted small thin people with armored skin and flexible joints and extra eyelids…oh, look, these guys also predicted extra eyelids to filter out blue light that disrupts sleep patterns, because of course evolution is all about conveniently delivering exactly what you need.

Are you ready for the disclosure of who actually commissioned this work? It’s a company called “Toll Free Forwarding” which is using it to promote their cell phone service with sensationalist bullshit.

Technology has revolutionized the way we do business. Whether it’s the instant access to infinite knowledge through a device in our pocket, or the ability for businesses to expand into new markets all over the world (like Canada, Australia, and Ireland) with a virtual phone number, the scope of technology’s impact is limitless, and this trend shows no sign of letting up.

I’m not linking to them, because that’s what they want, but you can probably find them if you wanted. I don’t know why you would, because the people running this company are dishonest idiots.