This past week has been Stevens County Fair week, and you know what that means: we strolled around looking at cute bunnies and ducks! 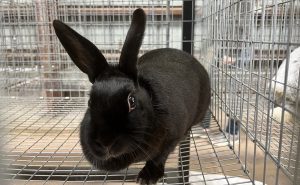 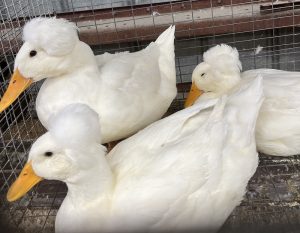 Also, unfortunately, all the trucks. This is a red county, with so many people who think the mega- (or MAGA-) truck is a status symbol. A dealership was selling trucks at the fair — $91,000!!?! Who spends that much on a basic vehicle? I think back to my aunt and uncle who had a working truck on their ranch. It was a battered near-wreck that they got used and cheap, and used to roll about the ranch, dropping off bales of hay or salt blocks. It was dented and dirty, and looked like a vehicle that saw daily hard use.

The ones I saw at the fair and parked around town on my daily walk are shiny and well-washed. They’re used by their owners to drive into town, where they can pick up a dollar cup of coffee at McDonald’s. I get to be a typical Liberal and walk, not drive, to the coffee shop for a two dollar French Roast, sneering at all the red-staters in their obviously pampered big pickup trucks.

Also, though, I’ve had the distinct impression that the trucks have been growing over the years. While I’m sneering, I’m also kind of appalled at the size of these monsters…and it’s true! The trucks have been expanding and becoming more lethal!

Trucks have gotten bigger, taller, gotten larger blind spots, and become much more powerful, luxurious, and expensive. Almost nobody even makes small pickups anymore, like the 1986 Toyota Hilux that I drove in college. The Toyota Tacoma, which used to be in that segment, is now almost as big as my old F-150.

This behemoth design trend — particularly the very tall, square front end seen in so many SUVs and trucks today — is both pointless and dangerous. Manufacturers have known for years that this style of vehicle is much more dangerous to pedestrians and cyclists, yet they keep making them bigger, taller, and heavier. Trucks and SUVs now make up fully 70 percent of all new cars sold in the U.S. Their bloated design is killing people, especially pedestrians.

When I made this observation on Twitter (in somewhat hyperbolic fashion), conservatives got steamed. Senator Ted Cruz (R-Tex.) accused me of being “afraid” of pickups. For the rest of the day, I got to enjoy good old conservative facts and reasoned debate: sexist and homophobic slurs, lurid fantasies about vehicular homicide, and repeated assertions that I drive a Prius — which appears to be the automotive equivalent of soy in the conservative mind palace. (I do not currently own a car of any kind, for the record.)

Rousing Cruz’s ire is a point in the author’s favor, but that 70% of the vehicles sold in the US are gross, heavy, oversized trucks and SUVs is a great American shame. And it’s killing people!

It does seem rather far-fetched to think that automakers are consciously building their biggest trucks to be more dangerous to pedestrians, but that is actually the case. To see why, let’s start with some data. According to the Governors Highway Safety Association, there were 6,283 pedestrian fatalities in 2018, an increase of 53 percent compared to 2009 and the highest figure since 1990. That gives the U.S. a figure of 19 pedestrian deaths per 1 million population. By contrast, France and Denmark had rates of 7.0 and 5.2 that year — especially remarkable because walking around in Paris and Copenhagen is far more common than it is in most American cities. Indeed, not long ago the European Union had a considerably greater rate of pedestrian fatalities than America, probably because walking is so much more common there. But the E.U. has cut pedestrian deaths by about 40 percent between 2007 and 2018 (from over 8,000 to about 4,900), while the U.S. has gone the opposite direction. Oslo and Helsinki did not have a single pedestrian death in all of 2019.

That’s nuts. We’ve owned, I think, 3 cars in the 40 years we’ve been driving, and the trend has been getting smaller and smaller cars each time. That probably means that at some point our matchbox is going to be crushed on the road by a massive Canyonero. 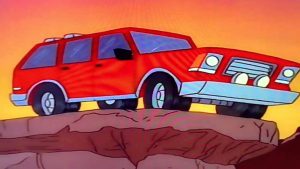