Aww, Saturday’s video about the Ark Park got a copyright claim, from something called “Matter Entertainment” (maybe they’re a company hired to edit AiG’s videos? I have no idea). They objected to a random short segment where Chaffee was babbling about how they didn’t have to bring insects on the ark — I think they just arbitrarily typed in a time code. 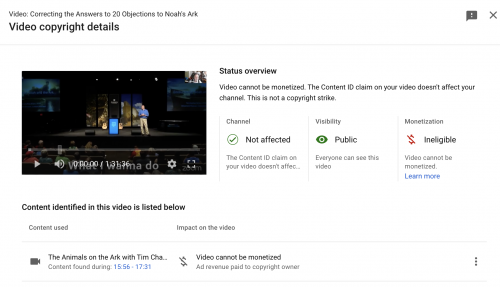 I have disputed this, just on the general principle that we’re making critical commentary. All that’s happened is the video has been demonetized, but since I only make a tiny pittance off these videos, I’m not worried about it. It’s still silly that these people are worried about criticism of this nature.

Canyonero time » « What do I know about activism?