Anyway, here was someone trying to claim that sperm aren’t alive, and that human life begins at conception. 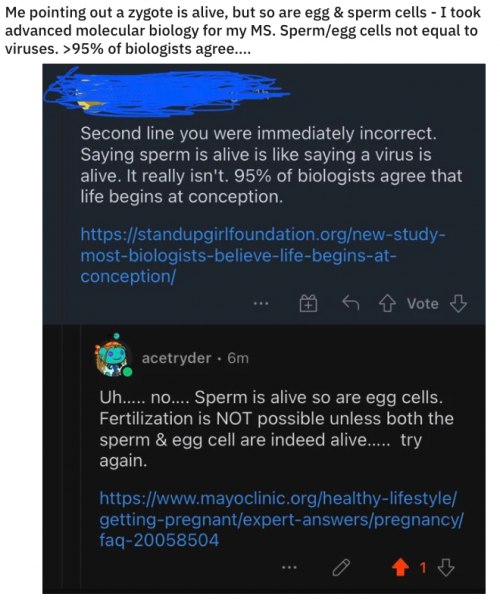 When I agreed with the second quote and also pointed out that that 95% number is a made-up statistic, I got this insightful comment.

You’re not a biologist, btw.

No one argues that a human zygote is something other than a human zygote. Unfortunately, I engaged with the clown claiming I’m not a biologist, and pointed out that those are also human sperm and human oocytes.

They were having none of that.

The question I always ask people who raise the claim that human life begins at conception…are human zygotes not the product of the fusion of human gametes? I

Yes… That’s what we call fertilization. Before conception the egg isn’t fertilized and only contains half of a human’s dna and only 23 chromosomes…

In biology, the zygote is called the cell of life because it usually is the first cell of a new organism. (since it’s basically a fertilized ovum.)

gametes are just the haploid stage of the human life cycle.

Are you sure you’re a biologist ’cause you sure don’t sound like one. Lmao.

I think I just got biologist-splained.

I also think they tripped over themselves. The whole argument rests on how we define what whole human organisms/human beings are. I agree that a sperm cell isn’t a human being. Neither is a zygote, or a blastula, or a gastrula, and neither is a fetus with an undeveloped nervous system and non-functional lungs and an inability to survive without its placenta. “Human” is a modifier used to designate the ancestry of a cell, and is not synonymous with “human being.”

But what do I know? I’m not a biologist!

Jebus, but I detest his smug smirking face » « Pacing about in the waiting room