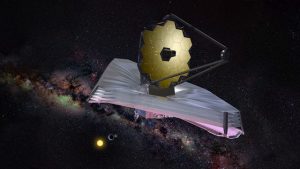 Oh boy, Answers in Genesis has published their assessment of the James Webb Space Telescope. They’ve already decided that it’ll be great for taking pretty pictures of stars, which they’ll no doubt use to illustrate their beliefs, but it’s bad, fallacious science. It’s secular, naturalistic, and saturated with evolutionary thinking!

So obviously, there are some awesome observational science aspects (observable, testable, repeatable) to this mission, such as observing and studying the farthest regions of the visible universe that were previously hidden to us. However, as seen from the many news reports published by the media (especially from NASA), the overall objectives for JWST are saturated in evolutionary (and really naturalistic) thinking. For example, NASA states on one of their websites, “The primary goals of Webb are to study galaxy, star and planet formation in the universe. To see the very first stars and galaxies that formed in the early universe, we have to look deep into space to look back in time (because it takes light time to travel from there to here, the farther out we look, the further we look back in time).”

You must understand the binary distinction that AiG makes about science. Good science is “observational” science: the work that just describes what you see right now, that doesn’t draw any inferences about cause and effect, past or future. It’s fixed and static. That leaf is green. That rock weighs 80 kilograms. The temperature right now is -24°C.

Bad science they lump into a category called “historical” science, because, as we all know, historians don’t draw any conclusions from the past, don’t make inferences about causes, don’t see any kind of links between historical events, ever. It’s all lists of dates and battles and kings, you know, kind of like what you see in the book of Genesis, which is good “observational” science. All that stuff about hypothesis testing, and induction, and experiment, and theory, and interpreting and predicting connections between events, the tools that scientists have relied on and found productive since at least the days of Francis Bacon…well, that’s just bad, with only occasional exceptions.

Note, these objectives fall into the category of science that’s called historical science (making assumptions about the past based on evidence in the present), which, by the way, can be useful in certain applications (like in forensic science when analyzing crime-scene evidence) but only when used through a biblical “lens” and logical worldview.

OK, so you’re allowed to use historical science, but only to solve murders. And all murders must be viewed through a biblical “lens”! I think that means they’re all committed by witches.

In case my sarcasm is obscuring this fact, no, these distinctions that AiG makes between observational and historical science are total bullshit. They make this bogus dichotomy all the time — it’s practically the first thing they tell you in the entranceway to their Creation “Museum” — but all it really is is a way for them to throw out otherwise totally unremarkable scientific ideas that they find objectionable because they reveal that their interpretation of the Bible is false. They don’t like that we can look at the universe and see that reality contradicts their biblical version of events.

Therefore, the JWST is a priori wicked and false.

However, in this instance, these statements for the JWST are clearly secular (and unbiblical), which inevitably means they’re also fallacious (this is the result of every unbiblical worldview). Notice the claim of “looking” back in time (when looking at objects deep in space) in order to see how everything in the universe began through cosmological evolution (i.e., the big bang). But note that when making this claim, they’ve already merely assumed cosmological evolution (by assuming star/planet formation occurred in the early stages of galaxies) in order to prove cosmological evolution (via “looking” back in time). This is a logical fallacy called begging the question.

Wrong. Science builds on prior observation and experiment to build models of how the world works, which are then continuously tested with further observation and experiment. The space telescope is built on a body of science and technology, driven by the fact that there are things we can’t observe now with existing technology. It was lofted into orbit to see phenomena that we were unable to see before, and that’s the entire point: if we could just assume that we already have all the answers, then there would be no need to spend $10 billion to make a better telescope. Astronomers will use this tool to test their predictions about what lies out there.

It may generate new theories, or it might provide further confirmation of cosmological evolution. That’s what the creationists actually fear, that this OBSERVATIONAL science will provide even more information showing that their HISTORICAL interpretation of biblical history is petty and silly, and that the “science” in their book of Genesis is nonexistent or false.