Oh dear. Oh dear oh dear oh dear. The Discovery Institute has turned it’s puerile, feeble attention to spiders now, and it’s as pathetic as you might imagine. It’s written by a guy, Eric Cassell, who felt it important to mention that he had an undergraduate biology degree, which he earned at least four decades ago, before committing to work in — take a wild guess — engineering, of course. Much as I respect many engineers and their work, it sure tends to breed inappropriate teleological attitudes in the brains of its practitioners.

This article, The Miracle of Spiderwebs, is typical of the type. First, talk about how freakin’ complicated spider webs are, then declare that they don’t understand how they could have evolved, which therefore means it could not have evolved. Never mind that spiders have been dependent on silk for their survival for 350 million years and there has been constant selection for more effective functionality, some old guy with negligible background in biology can’t understand it! Furthermore, it can’t possibly be because he’s an ignorant ass, he has to misrepresent the current science to make his case.

Despite great effort, humans have yet to produce anything functionally equivalent to silk. Through genetic engineering, attempts have been made to duplicate it without success. The main challenge is replicating the sophisticated and information-rich protein molecules found in the silk produced by spiders and other silk-producing arthropods such as silkworms — proteins that are nearly double the size of average human proteins. Smaller proteins do not have the strength or flexibility of spider silk. Given the advanced genetic and manufacturing technologies available today, it is remarkable that spider silk still cannot be duplicated. This illustrates just how advanced the engineering design of spider silk is.

No, he’s wrong. The silk molecules tend to be long, but not particularly “information-rich”, whatever that means. They are made up of long stretches of highly repetitive amino acid sequences, interspersed with special purpose regions. The strength comes from the repetition — they fold into crystalline bricks made of beta-pleated sheets. The length of each molecule is an obstacle to synthesizing them, of course, but there’s nothing magical or incomprehensible about the genes.

Rather, what makes them difficult to replicate is the silk production apparatus. The silk gland stores a large quantity of the fluid suspension of the silk molecules, but to make a silk fiber requires passage through a long duct that physically compresses and stretches the fibers as it extracts water and acidifies the environment, causing a controlled phase transition that makes the silk molecules align and precipitate to build a continuous fiber. That’s the hard part. It’s the gene (relatively easy) plus the specific mechanical and chemical processing that makes the silk. It is not at all remarkable that we can’t duplicate that process, but there’s nothing divine about it.

But that’s all there is to this article. Gosh, it’s amazing what biology can accomplish, says the guy who thinks it’s all about engineering.

Various spiderwebs, even among spiders of the same species, are far from identical. The most obvious reason for the differences is that each is tailored to its specific location. As the Goulds explain, “Every set of initial anchor points is different; the number of radii is contingent on opportunity; the beginning of the sticky spiral depends on where the longest several radii turn out to be. In short, each web is a custom production.” The Goulds postulate that spiders have a form of mapping ability that enables them to implement general design principles in a wide variety of circumstances. This is demonstrated, for instance, by spiders successfully making repairs to damaged webs.

And…? So…? The reason every web is a custom production is that nature is not uniform. A spider has an algorithm for navigating a variable environment: an orb weaver lays down radial lines from a central point to convenient anchor points, then walks a spiral, laying down sticky threads. The process builds a recognizable, functional sheet that varies depending on structures in the neighborhood. What is the miracle here?

Providing credible evolutionary explanations for the origin of silk and web design has proven problematic. Several theories have been proposed for the origin of both, but none have been generally accepted. Biologist and spider specialist William Shear concedes that “a functional explanation for the origins of silk and the spinning habit may be impossible to achieve.” One complicating factor is that the webs of some spiders that are more distantly related are nearly identical. Shear writes, “It appears probable that several web types are the product of convergent evolution — that is, that the same web has evolved in unrelated species that have adapted to similar environmental circumstances.” But as I will argue in Chapter 6, that is an unconvincing explanation for the origin of complex programmed behaviors.

For someone cited by a creationist, WA Shear sure has a lot of publications on the paleontology and evolution of spiders and other invertebrates. It looks like his work might have been mined to extract a misleading quote, and yep, he sure has.

That brief quote is taken from an article titled, “Untangling the evolution of the web,” and surprise, surprise, surprise, the creationist has left out the bulk of the context. I know, a creationist lies about the scientific literature? Say it ain’t so! But here’s the full and accurate quote from the paper. It starts, “A functional explanation for the origins of silk and the spinning habit may be impossible to achieve”, but then there’s a goddamn COMMA.

A functional explanation for the origins of silk and the spinning habit may be impossible to achieve, but the evolution of silk-spinning organs has been studied, and debated, extensively. Revealing evidence has come from the histology of silk glands — the details of their cellular construction — and from the embryological development of the spinnerets themselves. Histological evidence allows us to draw connections, or homologies, between silk glands in different spider groups, and embryology shows clearly that the spinnerets are paired abdominal appendages, with the silk issuing from modified setae, or hairs. So much information is available on the anatomy of the spinning apparatus, in fact, that the traditional view of web evolution rests heavily on a classification derived from the form and position of spinnerets.

This is one of those things about the creationist literature that makes me thoroughly furious: they unethically misrepresent and actively distort the work published in the credible scientific literature to pretend they are scholars. They aren’t. They’re liars. And they spin their lies out into collections of self-reinforcing nonsense. I note that the creationist here seems to think that convergent evolution is somehow an unacceptable explanation for the origin of multiple kinds of webs, and cites his own goddamn book, authored by a creationist engineer with no qualifications at all in this field, and ignores the fact that his source, WA Shear, goes on to give a summary of the evolution of diverse webs. That’s not a book worth reading, obviously.

Also, that Shear article contains a simple, clear illustration of the pattern of evolution that this creationist twit thinks can’t exist. 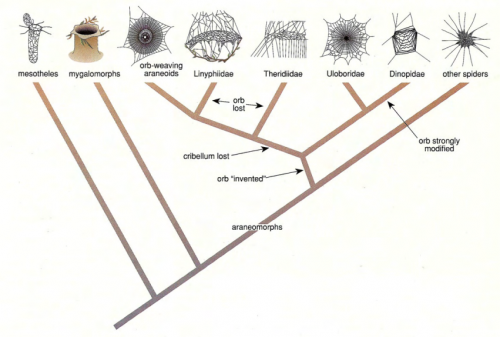 Phylogenetic tree shows how some families of spiders may have arrived at similar and different web designs. The Mesothelae are generally believed to have evolved first from the common ancestor of all spiders, followed by the Mygalomorphae and the “true spiders”, the Araneomorphae. The monophyletic hypothesis of orb-web origin (which is incorporated into this diagram) holds that the orb-web was invented by an araneomorph, the common ancestor of araneoid and uloborid spiders, that had a cribellum. The cribellum was acquired by a spider that was the common ancestor of all araneomorphs, including the araneoid superfamily and the uloborids. The araneoids lost the cribellum, and some araneoid families later lost the orb. Among the uloborids and their close relatives, the dinopids, are many species that have modified the orb.

But wait! There’s much more, all conveniently left out of Cassell’s stupid mangling of the article. We do have good models for the evolution of spider webs, all based on, as Shear notes, the evidence from taxonomy and histology and molecular biology. 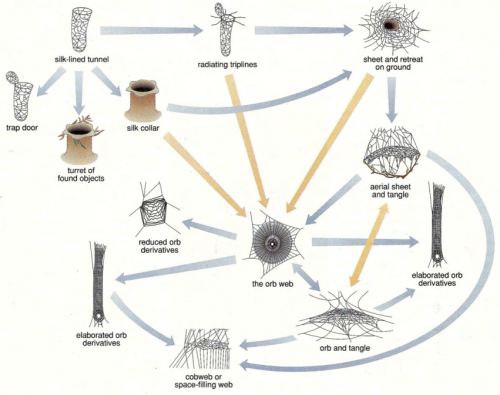 Hypothetical pathways of spider-web evolution form a tangled web of their own, with the question of the orb’s origin, and its role as a possible precursor to other webs, at the center. In several cases it’s not clear which web is ancestral; it is possible that some aerial sheet webs preceded the orb web, whereas others developed from the orb. Pathways that are less likely are indicated by light-orange arrows; for some of them there is no direct evidence.

Oh look. Someone had the proper respect for the evidence and was happy to talk about the strengths and weakness of the support for their model, and it wasn’t Eric Cassel.

I’ll also note that Cassel is relying on a generalist article from 1994 which incorporates little of the evidence from modern molecular phylogenies. He didn’t understand the 27 year old article, there’s little hope he could grasp a modern analysis, in which the details of evolution have been strengthened. Here’s an example from 2012, Early Events in the Evolution of Spider Silk Genes: 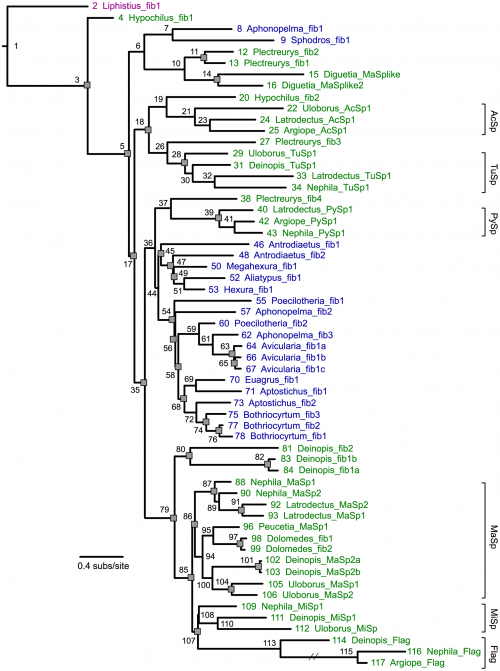 A more fundamental challenge for those seeking to provide a detailed, causally credible explanation for the origin of silk and spiderweb architecture is the number of genes involved in producing silk, and the complex genomes of spiders. After decades of failed attempts to provide a causally adequate explanation, one can be forgiven for concluding that we have no compelling reason to assume that a step-by-step evolutionary pathway to such an information-rich substrate actually exists. And as we will discuss later, there are now some positive reasons to consider that such information-rich systems have for their source something other than a purely blind material process. Here, suffice it to say that the behaviors and functions associated with both silk and web spinning exhibit many characteristics of human engineering, and engineering of a very high order.

Also repeat after me:

Biologists have provided causally adequate explanations for the origin and evolution of diverse spider webs, Mr Cassell is simply intentionally and maliciously ignoring them, and further, lying about the content of the scientific literature to make a claim that arachnologists are as ignorant as he is. He’s also logically contradictory.

If, Given the advanced genetic and manufacturing technologies available today, it is remarkable that spider silk still cannot be duplicated, how can you then turn around say that webs exhibit many characteristics of human engineering, and engineering of a very high order?

My hip hop band name will be “RTA Clade” » « Reminder: Celebrate the season with FtB today!