Wired tries to defend SETI and UFOlogy. They argue that there are 3 branches of inquiry — exobiology, the search for extraterrestrial intelligence, and the study of UFOs — and each has their place in our battery of methods.

Each of these categories has a different branch of research dedicated to it, and each one is probably less likely than the last to actually find something: Astrobiologists use telescopes to seek biochemical evidence of microbes on other planets. SETI scientists, on the other hand, use telescopes to look for hints of intelligent beings’ technological signatures as they beam through the cosmos. Investigating the idea that aliens have traveled here and have skimmed the air with spaceships, meanwhile, is the province of pseudoscientists. Or so the narrative goes.

The issue, the article argues, is that the boundaries of legitimate research have shifted over time and are culturally determined, not objective at all. There’s a continuum of legitimacy, and it’s entirely arbitrary that we place UFOs in pseudoscience, and don’t fund SETI, and think exobiology is valid and interesting. That is a good point, except that I think there is a solid criterion that is rooted in how we do science.

Here’s the deal: early in our training, we’re taught to keep an open mind — you use hypotheses to guide a line of research, but we must be prepared to find unexpected results and alternative explanations. We’re adapted to thinking, “My experiment to test my hypothesis should find X, but if it finds Y we’ll have to modify the hypothesis, and if the answer is Z, well, back to the drawing board, but gosh, that would be exciting.” Experiments are designed that give interesting results, and whether the results are compatible with our hypothesis or reject it are equally useful.

Exobiology fits the paradigm. We’re looking at other worlds with they hypothesis that life produces chemical signatures we can detect, and even if we don’t see them, we learn something about that alien planet. We gather data looking for biology, and if we don’t see it, we still have data on extraterrestrial chemistry. That’s the safe bet funding agencies look for, that we’ll learn something even if our preliminary hypothesis fails.

SETI doesn’t work that way. SETI is looking for specific patterns in extraterrestrial signals; they have a pre-set goal, rather than an open inquiry. Not finding a signal they are looking for is a literal failure that tells us nothing. That star isn’t transmitting anything useful? Abandon it, move on, look somewhere else. Over and over again. It also doesn’t help that all their hypotheses look like ad hoc dreck contrived to convince people that there might be someone out there, with infinitely bendable variables.

UFOlogy, on the other hand, is an extreme example of that latter phenomenon. We don’t see what we’re looking for — no little green men, no crashed spaceships — so they invent elaborate and often contradictory rationalizations. The evidence isn’t there, but they are determined to pretend that it is. It’s a kind of anti-empiricism where the accumulated data is irrelevant to the conclusion.

It’s as simple as asking, “What will we learn from doing the observation/experiment?” SETI’s answer is nothing, unless we find a one in a trillion possibility, then it’s the jackpot. UFOlogy’s answer is that they already know little green men exist, so we just have to photograph thrown pie plates until we’ve persuaded the establishment. Neither is good science.

Both SETI and UFOlogy are strongly susceptible to apophenia as well. They are trying to fit complex data to a prior expectation, so there’s a tendency to impose patterns on noise. Here’s a classic example: NASA has observed complex sand dune formations on Mars. 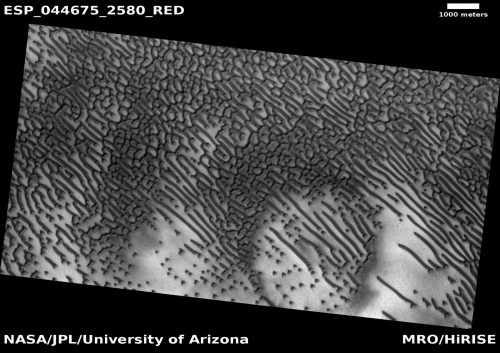 Cool. What causes it? These are windblown rills shaped by topography and prevailing, but changeable, winds that formed under more or less chaotic pressures, producing lines and bumps and branches.

But, if you’re looking for it, it could be a signal. Perhaps, if we ignore the physical mechanisms that made them, these dunes could be Martian handwriting. Or better yet, a Martian code.

Right. So someone, probably as a bit of lark, tried to interpret them as dots and dashes, and then translated them into Morse code (why ancient Martians would have used a code devised by a 19th century American is left as an exercise for the reader). The Martian dunes therefore announce to the universe these immortal words:

I’m sure that means something profound in the original Martian. Either that, or it’s a compressed recipe for cored cow rectums.

That’s the problem with SETI, though. The universe produces patterns all the time, and human brains strain to impose interpretable derivations on them — SETI will milk that for all the news and attention they can get, even if it is ultimately meaningless.

Meanwhile, UFOlogists already know that the aliens are living on Mars, and have trained Bigfoots raking the dunes to send secret messages to the fleet hovering invisibly in our atmosphere, and you ignore it at your peril, you fools.

Not a good start to the day » « Bye-bye, Tweety