We had a little fracas in our front yard yesterday. My wife has several bird feeders out there, and a tree branch is draped with disgusting lumps of suet which have attracted multiple species and individuals of woodpecker — there are a couple of big pileated woodpeckers that hang out around here regularly now. Unsurprisingly, this concentration of happy birds attracted an unwelcome visitor. 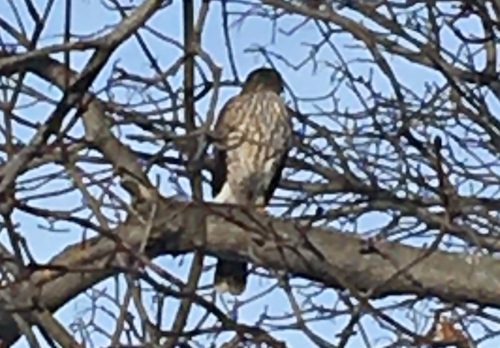 There was a lot of squawking and frantic fluttering and panic-stricken birds flying away from our house.

That got me thinking. The woodpeckers are rather helpless, with the choice of eating or being eaten. If I were in that position of a predator blocking my access to food and threatening to kill and eat me, I’d be pissed off and talking to the neighbors about what to do about it. Maybe we’d contact local communities and trade goods and services to recruit samurai — you know, like maybe 7 of them — to hunt down and kill the predator that I’m personally helpless against, so that I can resume gnawing frozen fat off a tree branch.

Woodpeckers don’t have that capability, but humans do. It seems to me that this attribute of revenge and organized overkill might have been a major advantage in our evolution. Other animals certainly make the effort to eliminate competition, but we’re really good at building cooperative specialists to mob anyone who interferes with our living, or annoys us a little bit, or makes a rude comment on Twitter.

We may have overdone it, but our local woodpeckers would probably appreciate being able to find an ally to chase off the bad guy.

Actually, they do have Mary, who’ll go out and wave her arms and yell at the offending bird, but she’s going to go away for a few weeks. I’ll still be here for most of that time, but I’ll probably just watch the drama and muse about the evolutionary pressures imposed by predation.

Hello from Longmont, CO » « Do not put Gwyneth Paltrow in your vagina