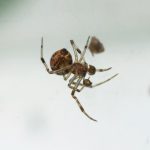 I planned to start mating spiders today, and got my first disappointment: I waited too long, I think, because several of the males had died. I think maybe they pined away with blue pedipalps. The males are definitely more fragile.

So then I fed a couple of mighty females so they wouldn’t be tempted to snack on the boys, and then introduced them to males. The males immediately scampered to the far side of the cage. No mating today, at least not that I’ve seen. I’ve left them together and hope the guys make it through the night.

Heritage. I’ve learned to hate that word. » « Evolutionary Psychology gets another whack