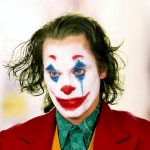 I went off to see Joker last night, feeling conflicted. The director, Todd Phillips, has been kind of a dumbass complaining about how he’s a victim of “cancel culture”, so I felt like skipping it just because the guy has a ridiculously thin skin. He’s also been whining about how you can’t do comedy anymore, because his audience has a thin skin.

Go try to be funny nowadays with this woke culture. There were articles written about why comedies don’t work anymore—I’ll tell you why, because all the fucking funny guys are like, ‘Fuck this shit, because I don’t want to offend you.’

This was confusing because Joker is not a comedy. Definitely not. Not a single laugh in the whole show, except for the strained, fake laughter of the central character. It’s a bitter, sad story of a man’s descent into hell.

Another thing it’s not is a comic book movie. It’s got token signifiers — it’s set in Gotham City, with an Arkham Asylum, and a rich guy running for mayor named Thomas Wayne who has a young son, Bruce — and that’s about it. A few callbacks to characters in comic book movies does not make it a comic book movie, although maybe it makes it more marketable. I left thinking it would have been better with no attempt to connect it to the world of comic books, as a character study of a man named Arthur Fleck struggling with mental illness and an uncaring, brutal society divided into the really rich and the really poor. It’s also an interesting exercise in the use of the unreliable narrator.

You never know what’s really happening in the story! It’s told from the point of view of Arthur Fleck, and constantly slips into his fantasies. The woman in the apartment down the hall is his girlfriend…no, she’s not, she’s terrified by him. He’s in the audience of his favorite late night talk show host, and is singled out for praise and brought on stage…no, he’s not, that’s clearly a daydream he’s having. He gets invited to appear on the talk show after his terrible stand up act goes viral…wait, is this a real part of the storyline? Is any of it? The final scene is in Arkham Asylum…is the whole dang movie from start to finish a fantasy playing out in Arthur’s mind?

I like this kind of complicated ambiguity. It keeps me thinking non-stop throughout, and makes me consider seeing it again just to figure out what I missed, and assemble a complete picture of the puzzle. If you’re one of those people who thinks it’s a celebration of incels committing mass murder, you’ve made a very superficial reading of the story. It’s not that, either.

It’s also not about revolution and an underclass rising up to throw off the shackles of the rich, an interpretation one could also make. Arthur is a “hero” in the movie not to a criminal underworld, but to an oppressed majority of working class and poor people living in this grungy hell-hole of a city. They don’t know who he is, he isn’t a leader, he just represents somebody embodying the spirit of one of their signs, “Kill the Rich”. We don’t even know if this is an actual event in the world of the story, or just another wishful thought oozing through Arthur’s head.

I walked out feeling like this is the kind of movie I ought to like, and I sort of did, but the one terrible flaw is that the whole thing is unremittingly discouraging and hopeless. The message is that the world is shit, and it’s even shittier if you’re poor and have a mental illness, and even the wealthy who ought to have it easier are just grim, soulless people who take pleasure in punching down. I guess you could argue that that is all true, and the movie has built an excellent mirror to society. I’d like to be able to imagine one tiny sliver of hope somewhere, though. I guess I’m a bit like Arthur that way.

Poster wars! » « A new edition of Morris’s own North Star!