It’s happening again. Our local [SATIRE!] campus troglodytes and assholes, the College Republicans, are splattering corkboards with their messages of resentment. They really don’t like the fact that we’ve got students who don’t think like they do and expect to be tolerated, so they’ve been putting up argumentative, emotional posters in reaction to statements of fact. Like these two in the science building. 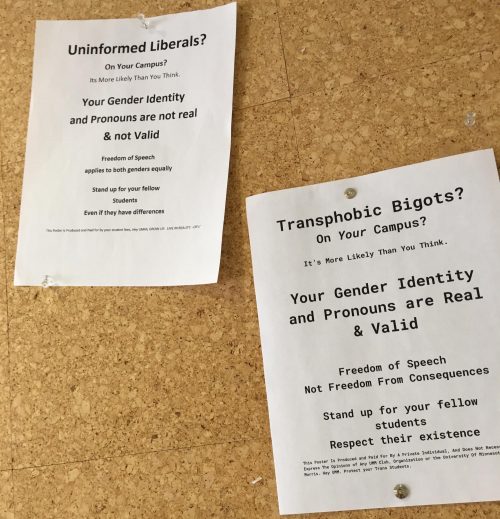 Its More Likely Than You Think.

and Pronouns are not real

applies to both genders equally

Even if they have differences

This Poster is Produced and Paid for by your student fees, Hey UMM, GROW UP, LIVE IN REALITY. -CR’s’

It’s More Likely Than You Think.

and Pronouns are Real

Not Freedom From Consequences

This Poster Is Produced and Paid For By A Private Individual, And Does Not Necessarily

Express The Opinions of Any UMM Club, Organization, or the University of Minnesota

I can tell that the College Republican poster is a feeble attempt at parroting the language of the tolerant students because they end up undermining their own claims. Should I let the College Republicans know that that is kind of a self-own? Do they really mean to tell a gang of indignantly cis people that their pronouns (he/him, she/her) are not real and not valid?

It’s almost amusing how pissed off the CR’s are at people who affirm their own identities, that they then have to print up posters insisting that “NO, WE KNOW YOUR IDENTITY BETTER THAN YOU DO. SHUT UP SHUT UP SHUT UP.” Except of course that these conservative clowns want to pass legislation to restrict everyone’s freedoms, and some of them are likely to express their hate with violence.