Grrr. The CBC got me excited with a headline about “the granddaddy of spiders”. It’s not a spider. It’s a Cambrian chelicerate, which ought to be cool news enough without pretending it’s some kind of familiar organism. At least it wasn’t SciTech, which called it a frightening 500-million year old predator” or LiveScience, which called it a “nightmare creature”. C’mon, people. It was a couple of centimeters long. I do not like this pop sci nonsense that has to jack up the significance of a discovery by pretending it was scary. Does this look scary to you? 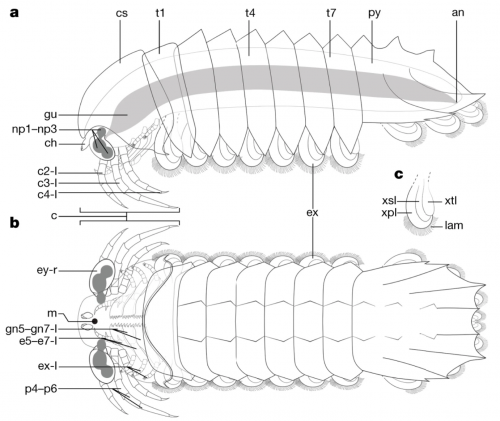 a–c, Reconstructions. a, Lateral view. b, Dorsal view (the gut has been removed for clarity). c, Isolated trunk exopod. an, anus; lam, lamellae.

At least the article by the discoverers is sensible. This is an early Cambrian chelicerate with those big old feeding appendages at the front of the head (which spiders also have) and with modified limb appendages that resemble book lungs (also a spider trait), but they are most definitely not spiders. They are their own beautiful clade, and cousins of Mollisonia plenovenatrix might have been spider ancestors, but calling them spiders is like excavating an ancient fish and calling it a mammal. Very misleading.

Yes, I’m being pedantic. It matters. Let’s not diminish the diverse chelicerates by calling them spider wanna-bes.

Here’s the abstract for the paper.

The chelicerates are a ubiquitous and speciose group of animals that has a considerable ecological effect on modern terrestrial ecosystems—notably as predators of insects and also, for instance, as decomposers. The fossil record shows that chelicerates diversified early in the marine ecosystems of the Palaeozoic era, by at least the Ordovician period. However, the timing of chelicerate origins and the type of body plan that characterized the earliest members of this group have remained controversial. Although megacheirans have previously been interpreted as chelicerate-like, and habeliidans (including Sanctacaris) have been suggested to belong to their immediate stem lineage, evidence for the specialized feeding appendages (chelicerae) that are diagnostic of the chelicerates has been lacking. Here we use exceptionally well-preserved and abundant fossil material from the middle Cambrian Burgess Shale (Marble Canyon, British Columbia, Canada) to show that Mollisonia plenovenatrix sp. nov. possessed robust but short chelicerae that were placed very anteriorly, between the eyes. This suggests that chelicerae evolved a specialized feeding function early on, possibly as a modification of short antennules. The head also encompasses a pair of large compound eyes, followed by three pairs of long, uniramous walking legs and three pairs of stout, gnathobasic masticatory appendages; this configuration links habeliidans with euchelicerates (‘true’ chelicerates, excluding the sea spiders). The trunk ends in a four-segmented pygidium and bears eleven pairs of identical limbs, each of which is composed of three broad lamellate exopod flaps, and endopods are either reduced or absent. These overlapping exopod flaps resemble euchelicerate book gills, although they lack the diagnostic operculum. In addition, the eyes of M. plenovenatrix were innervated by three optic neuropils, which strengthens the view that a complex malacostracan-like visual system might have been plesiomorphic for all crown euarthropods. These fossils thus show that chelicerates arose alongside mandibulates as benthic micropredators, at the heart of the Cambrian explosion.

I think this diagram illustrates the relationship of M. plenoventrix to spiders well. 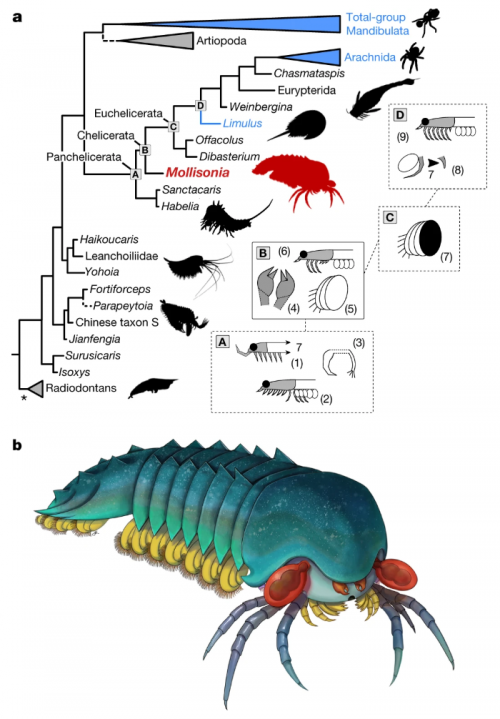 a, Simplified consensus tree of a Bayesian analysis of panarthropod relationships. This tree is based on a matrix of 100 taxa and 267 characters. Extant taxa are in blue; dashed branches represent questionable groupings. Asterisk shows that the radiodontans resolved as paraphyletic. This analysis excludes pycnogonids, but this had little effect on the topology. The letters A to D at the basal panchelicerate nodes refer to boxes on the right, and summarize the appearances of major morpho-anatomical features: (1) extension of cephalic shield, including a seventh tergite; (2) cephalic limbs all co-opted for raptorial and masticatory functions, and reduction of some trunk endopods; (3) dissociation of the exopod from the main limb branch; (4) presence of chelicerae; (5) trunk exopods made of several overlapping lobes; (6) some cephalic limbs differentiated as uniramous walking legs; (7) multi-lobate exopod covered by sclerite (operculum); (8) reduction of seventh cephalic appendage pair; and (9) all post-frontal cephalic limb pairs are uniramous walking legs. b, Life reconstruction. Drawing by J. Liang, copyright Royal Ontario Museum

Not a spider, but still cute and adorable.

OK, I guess she’s cuter than a spider » « The MIT Media Lab is going to be getting some intense scrutiny