I’ve got one baby at home, and today when I came in to the lab we found even more babies…cute little spider babies. It seems this was the weekend almost everyone decided it was time to emerge from the egg sac, and seven egg sacs spewed out clouds of spiderlings.

This is a little overwhelming. I spent a few hours separating out spiderlings and trying to spread out the masses to more containers.

Here is the maternity ward. See all those vials with foam plugs? Each one contains a female spider and one or more egg sacs. If you look closely, you can see lots of little dots, and that’s the cloud of new babies. That’s probably a thousand spiders you’re looking at. 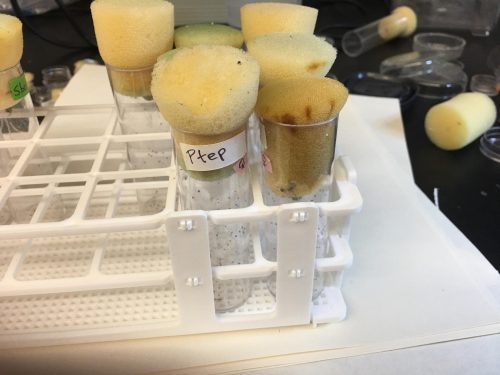 Let’s zoom in a little on one of the vials.

Mom is in the center, gnawing on something. To the lower right, the brown thing that looks like a deflated football is the egg sac. All the other small dark blurs are baby spiders, hanging in the cobweb. 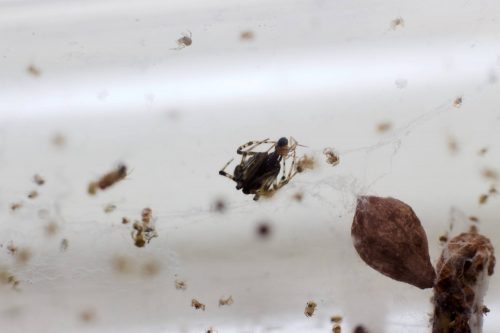 All the babies are suspended in a 3-dimensional space, clinging to bits of webbing, and in all different kinds of orientations. Spiders would be natural astronauts — if we ever meet aliens with physiology analogous to spiders, we can just hang it up and surrender, we won’t be able to compete. 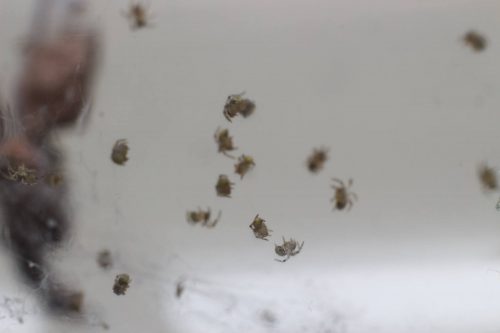 A close-up of the mother spider, where we can finally see what she’s eating. I was afraid it might be one of her babies, but no, I’d fortunately fed them flies on Friday, so cannibalism is not on the menu…yet. 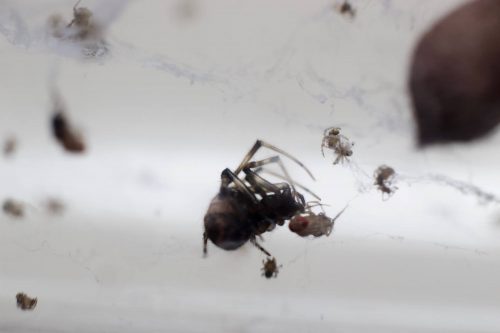 This is too many spiders for one little vial. I started separating them out into more containers, but I haven’t finished and will try to do more tomorrow. I mentioned before that we’re trying to figure out an optimal density for raising them, and so far there isn’t one — we’re seeing roughly 55% mortality over a week, with a lot of death occurring during their first molt after emergence, and the density of spiderlings in a container doesn’t seem to matter. We still need to thin them out just so we can feed them an appropriate number of flies.

Oh, yeah…we still have another 8 or 9 egg sacs that haven’t hatched out yet, so the population explosion isn’t over yet. There’s going to be a lot of culling going on before winter strikes.