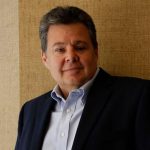 He’s the underserving owner of big chicken processing plants, an enterprise desperate for cheap labor and loaded with terrible working conditions. One of the reasons they hire undocumented workers is because they can be paid little and compelled to work under inhumane, dangerous connections, so that people like Grendys can make more money; because this country is caught up in anti-immigrant fervor, ICE can carry out massive raids on his plants and arrest workers, not bosses, and no one complains…at least no one with any influence.

You might be wondering, though…doesn’t this disrupt the work, costing Mr Grandys money? Sure, but he’d rather pay it out as a little loss in output than to, for instance, pay workers a living wage, or upgrade the processing plant to be cleaner and safer. And, as it turns out, this raid occurred after the plant was penalized for harrassment, and after efforts to unionize. We here in America have a fine tradition of brutal union-busting, how convenient that the federal government provides thugs at no cost to the owner.

The unusually large size of the raids is unheard of, but in this instance, there were extenuating circumstances. A raid that took in an estimated 680 immigrants of various statuses was allegedly planned 11 months in advance. In this case, the circumstances include a $3.75-million-dollar lawsuit settlement. This lawsuit, brought by the U.S. Equal Employment Opportunity Commission (EEOC) in a Morton, Mississippi, plant included accusations of physical and sexual assaults against its workers. There were also accusations of intimidation, labor violations, exploitation, and harassment of its labor force, with immigrants making up a huge portion of that labor. Some people believe that the raids may be part of a larger intimidation. According to the New Orleans Workers’ Center for Racial Justice, “ICE field office’s actions will fuel labor abuses, human trafficking, and a race to the bottom for workers’ rights.”

It’s not just brown-skinned people who feel the hammer, though. Have you ever heard of Christian Alcoholics & Addicts in Recovery, also called “The Chicken Farm”? It’s a program operating in Oklahoma, Arkansas, Texas and Missouri which purports to provide an alternative to prison for anyone convicted of drug crimes, although they’re apparently willing to accept anyone, whether they’re addicted to anything or not. You can sort of guess where this is going by the word “Christian” in the name.

About 280 men are sent to CAAIR each year by courts throughout Oklahoma, as well as Arkansas, Texas and Missouri. Instead of paychecks, the men get bunk beds, meals and Alcoholics and Narcotics Anonymous meetings. If there’s time between work shifts, they can meet with a counselor or attend classes on anger management and parenting. Weekly Bible study is mandatory. For the first four months, so is church. Most days revolve around the work.

“Money is an obstacle for so many of these men,” said Janet Wilkerson, CAAIR’s founder and CEO. “We’re not going to charge them to come here, but they’re going to have to work. That’s a part of recovery, getting up like you and I do every day and going to a job.”

The program has become an invaluable labor source. Over the years, Simmons Foods repeatedly has laid off paid employees while expanding its use of CAAIR. Simmons now is so reliant on the program for some shifts that the plants likely would shut down if the men didn’t show up, according to former staff members and plant supervisors.

Translate “Money is an obstacle for so many of these men” to “We make them work for free.”

“Dignity in work”. There’s also dignity in earning a just and fair return on one’s labor. Is there dignity in being a parasite who lives on the dangerous, back-breaking work of others?

I’m going to have to agree with that last statement, though. The rich are doing their best to turn the country into a slave camp, to their benefit.

Just to put more frosting on the grift, here’s a cute trick the parasites can pull. Chicken processing is dangerous work — all kinds of machines that shred birds can also do terrible things to worker’s limbs. And when someone’s hands are shattered in a machine? CHA-CHING, CAAIR gets the benefits.

Men who were injured while at CAAIR rarely receive long-term help for their injuries. That’s because the program requires all men to sign a form stating that they are clients, not employees, and therefore have no right to workers’ comp. Reveal found that when men got hurt, CAAIR filed workers’ comp claims and kept the payouts. Injured men and their families never saw a dime.

Wait! There’s more! Remember, CAAIR is advertising itself as a tool for therapy and recovery of addicted individuals. So why don’t they employ therapists and experts in drug treatment?

In addition to injuries, some men at CAAIR experience serious drug withdrawal, seizures and mental health crises, according to former employees. But the program doesn’t employ trained medical staff and prohibits psychiatric medicine.

Poultry processing has become a sinkhole of unfair, criminal labor practices. All I can say is…stop eating chicken. It’s cheap protein where the filthy rich can degrade worker’s lives in its production, because it is poorly regulated.

Maybe you can start eating KFC again when the profits of their labor is shifted to the pockets of the workers someday.