Every state has a little Florida Man in it. In Wenatchee, Washington, Cameron Wilson was carrying a gun in his front pocket — we’re already in the territory of Bad Ideas — when it went off and sent a bullet ripping through his testicles.

Upon arriving at the hospital, a doctor was operating on the gunshot wound when a balloon of marijuana slipped out of Wilson’s anus, court records show, according to the report.

So he was smuggling marijuna in his rectum, in a state where marijuana is a legal drug. That’s just brilliant.

I grew up in the lush, cosmopolitan, progressive Western side of Washington, and it’s terrible to say, but Mr Wilson is representative of how we saw the Eastern half of the state, which was the domain of conservative ranchers, feral teenagers, and a thriving drug trade. And now, there’s a proposal to split Washington in two! It makes sense at a cultural level — East and West are very different places — but it makes no sense at all that Eastern Washington would want it. They’d lose all the economic benefits of sharing resources with the wealthy Puget Sound region, and they’d no longer be able to check the more progressive policies that come out of Seattle. They’d be a poor, arid, politically weak rump of a state.

Worse, the proposal is coming from Matt Shea, a Christian Identitarian who wants to wage Biblical war on sodomites, atheists, communists, and heretical Christians (“Biblical war” means, to him, killing any man who resists and taking their women and children as slaves), and who was divorced for spousal abuse, and who organized and led a hate group in Spokane. He’s completely wackaloony.

Shea claims his breakaway state of Liberty would rival Texas in prosperity. Except, or course, that Eastern Washington lacks oil or a seaport or much of anything in the way of industry or trade. They do have cows. And sagebrush. Pretty scenery. Rocks.

Oh, and real estate and a massive nuclear waste site.

And though Liberty would have far fewer people, it would gain national political clout and rival or surpass many other Western states in population and wealth. It would be larger than Montana, Wyoming and the Dakotas. It would continue to capture billions of federal dollars to clean up the Hanford nuclear site.

It’s also populated with people who shoot their balls off. The kind of people who would vote for Matt Shea. 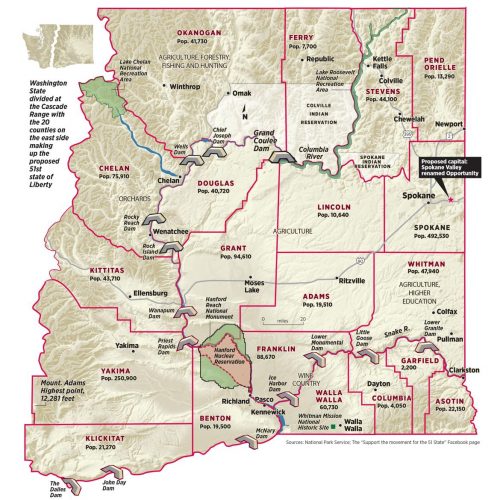