They ran an article titled Activists Must Stop Harassing Scientists. That made me wonder what they’re complaining about: animal rights activists setting fire to labs? Anti-vaxxers deluging immunologists with abusive emails? Republicans misrepresenting climatology and trying to shut down research?

Nope, none of the above. They are concerned that women complaining about sexual harassment are driving “good” men out of scientific fields. Their evidence: two anecdotal complaints. The first is from an anonymous Australian astrophysicist who left his native country for a position in China, because of the “political climate in Australian universities”.

It’s very hard to find a tenured job in astronomy if you don’t belong to a protected group (alas, I am a white hetero Christian male, bad luck!) and/or you don’t do enough visible activism (or at least enough virtue signaling) for a number of green-left issues. In China, it’s highly likely that Chinese astronomers are subject to the same political interference from the Communist Party, but at least a foreigner like me is left alone, and I can do astronomy in peace, without wasting my time with diversity initiatives. And I see first hand that astronomy jobs are still given to the best candidates regardless of gender, ethnic origin, etc. Unlike my Australian boss, my current Chinese boss has never berated me for not being socialist enough.

Huh. Here’s a chart of the percentage of women in the International Astronomical Union, by country. 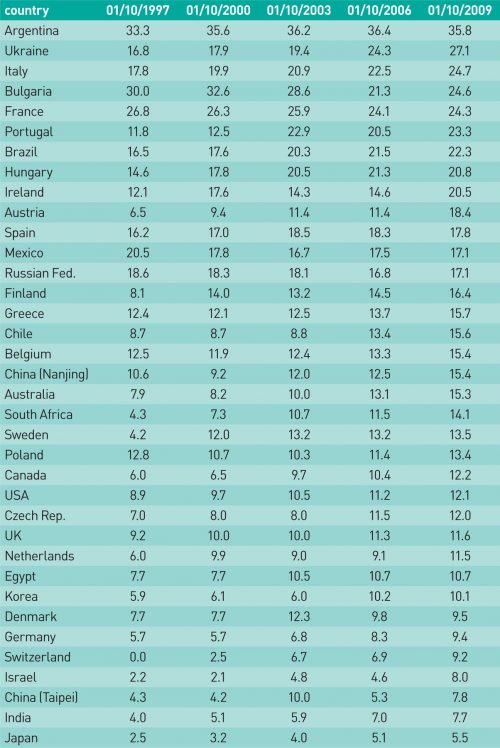 I don’t see evidence of discrimination against males, Christian, white, hetero or otherwise in Australia, or in China. Rather, there seems to be a strong bias against women. I wonder why that is?

If you care about the science or your specific field, abandoning diversity initiatives would seem to be likely to drive more good women out of the field than good men. If you actually cared about merit, I would think you’d want to work to make sure the best people had opportunities.

He also complained that he had to write a diversity statement. It is routine that researchers have to justify their contributions to university administrations — you have to write a summary of your research, your teaching, and committee work and outreach. This is utterly normal. As he describes it below, the diversity statement is simply more of the same.

There are many levels of discrimination. At one level, you have an increasing number of jobs, fellowships and grants officially reserved for women and “first nation” people. At another level, for jobs open to white males, there will be special clauses in the application to make sure the candidates are sufficiently woke. For example, you’re required to write a “diversity statement”—which is nothing more than a pledge of allegiance—to illustrate how you have shown “leadership” when it comes to diversity issues in your previous jobs, your teaching and your research (organizing workshops, writing reports, giving talks for women-only audiences, etc.)

It’s not a “pledge of allegiance” to state how you have addressed diversity concerns in your work. It is not oppressive to be asked how you’re trying to correct a bias in your field. But I guess some snowflakes are so outraged at having to write a paragraph about that that they’ll pack up, leave their homes, and move to a country where their native language isn’t routinely spoken, rather than face up to real problems in scientific recruitment.

Their second example of the oppressive nature of Leftist academics is…Alessandro Strumia. Strumia is the guy who gave a talk at CERN in which he invented his own citation metric which conveniently “proved” that women were less productive in physics than men, and also even more conveniently “proved” that a woman who got a job that he applied for was inferior to Alessandro Strumia, as if the job application process could be fairly reduced to performance on a single metric. His arguments were all refuted by the physics community, exposing what a shallow, bigoted thinker he is. All you need to know is that Strumia blamed “cultural marxism” for sexist discrimination, and claimed that differences in physics ability were forged by “human biology practiced as in the plains of Africa thousands of years ago” (his grasp of English grammar is rivaled only by his understanding of biology). 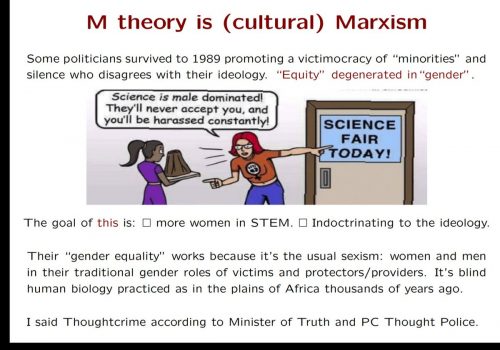 (You can see all of his slides online. They do him no favors.)

Quillette predictably claims that he is the victim of…wait for it…a witch-hunt, a word that automatically throws a red flag on the play. But then, being published in Quillette is itself a big red flag.

Looking for some fun reading? » « The new astrology, accepted by True Skeptics