Clearly, we need to settle the next election with a dance-off. One of those bizarre conspiracy theorist conservatives dug up an old (well, from 2010) college video which included shots of Alexandria Ocasio-Cortez committing a grievous sin, dancing, and triumphantly presented it as if it were an indictment. Said crackpot’s account has since vanished, possibly out of embarrassment at his failure to elicit howls of outrage. 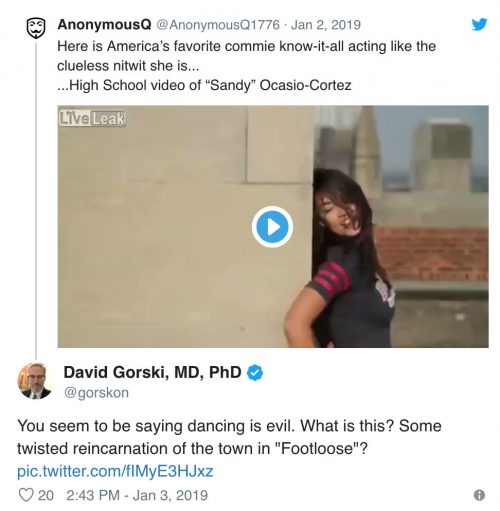 It’s kind of amazing. I only wish I could be 20 years old and dancing, and am a little envious of the young…but this was a good thing. Why would anyone think an innocent video of college students expressing some joy is a sign of nitwittery? Are the critics Baptists, or Republicans?

Those who were seen dancing were thought to be insane by those who could not hear the music.

If you want to watch the whole video, here it is. It’s not a moment of high culture and deep political significance, it’s just young people having fun.

If that’s bad, you haven’t seen Tucker Carlson dance. I don’t think Carlson should be fired for bad dancing, though, but for being a racist fuckwit.

If they actually were logical, it would be easy to crush them » « Those stupid Irish and their inferior brains