I’m just ruined for some things. Here’s this article that’s smack dab in my wheelhouse: Grow Smart and Die Young: Why Did Cephalopods Evolve Intelligence? It’s a topic I’m very interested in, but the article fell flat for me. I’m going to be a bit nit-picky here.

The good part of the story is that it’s a review of various hypotheses for the evolution of intelligence in various clades. They propose 3 general classes of hypotheses.

Not mentioned is an alternative sort-of null hypothesis: there was no selection for intelligence at all. It hitch-hiked along with an expansion of neural tissue associated with morphological changes — intelligence is something that just emerges with a surplus of brains that arose for other reasons.

OK. With my addition, I think this is a reasonable framework for discussing the evolution of intelligence. Unfortunately, the paper has a couple of problems. One is that, well, it’s a review paper that doesn’t have any data or experiments or even any real evidence. It’s speculative, which is fine, but I went into it with higher expectations.

The one piece of information I found useful, though, was this table, which gathers together information about groups of animals with a reputation for intelligence and puts them in a comparative context. That’s what I like to see! 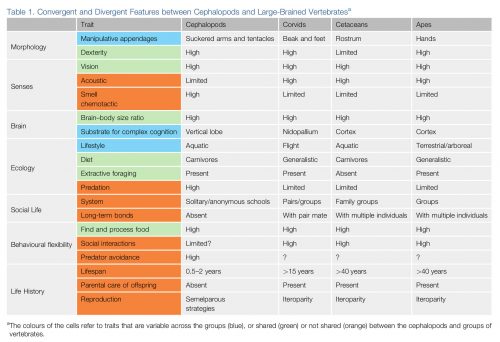 But. Here’s what bugs me: it’s comparing a whole taxonomic class, the cephalopods, with a couple of families. The cephalopods are diverse, with some impressively intelligent representatives, like the octopus. But market squid? Are they particularly bright? I don’t think so. We could say the same of primates — are we really going to compare Galago with Homo? This table would have benefited from a much tighter focus.

It also leaves out some features unique to various groups. Can we compare complex active camouflage with complex language? It seems to me that maybe there are different preconditions that can lead to intelligence, and maybe an illustration of the significant differences between them would be more informative? There could be many, radically different paths that lead to increased demands for more flexibility and intelligence — maybe all three of their hypotheses, and more, are all true.

For instance, look at the last rows of the table, on life history. That part is really interesting, and the paper does discuss it at length. Some cephalopods are intelligent creatures that are cruelly cursed by their nature with very short lifespans of 1 or 2 years, where reproduction is often a death sentence, and the opportunity to educate offspring is non-existent. What intelligence they do have has to be inherent, because there is so little opportunity for learning.

Also compare social lives. Cephalopods, depending on the species, are either solitary or live in large schools, and do not seem to form long-term social bonds; the vertebrates on the list are all social to various degrees, and do pair-bond. After reading the paper, I came away thinking that I mainly saw diversity and different forces that could all lead to intelligence, and don’t have much unity of mechanisms. There is at least a nice summary of cephalopod evolution.

Around 530 Mya a group of snail-like molluscs experienced a major shift in their morphology and physiology: their protective shell became a buoyancy device. The comparison with nautiluses, the only extant cephalopods that retained the external shell, suggests that this key event co-occurred with the emergence of arms, funnel, and crucially, a centralized brain. The increase in computational power at this stage might have been selected to support arm coordination for locomotion and object manipulation, as well as navigation in the water column and basic learning processes. Next, around 275 Mya the external shell was internalised (in the ancestors of cuttlefish and squid) or lost (in those of octopuses). It has been speculated that competition with marine vertebrates was a driving factor that led to dramatic changes in the lifestyles of these animals. First, the disappearance of the external shell allowed animals to occupy a wide array of ecological niches. Consequently, modern cephalopods are found in all marine habitats, from tropical to polar waters, and from benthic to pelagic niches. Second, the loss of the protective shell drastically increased predatory pressures and consequently the rates of extrinsic mortality. These novel ecological conditions might not have only played a major role in the emergence of sophisticated biological adaptations (e.g., lens eye, and chromatophores) but also in the coevolution of intelligence and fast life history of cephalopods.

Maybe intelligence is something that just arises in response to complex life strategies, where “complex” is an all-purpose buzzword for any of a million situations. If we ever meet aliens on a distant planet, this tells me you’d be unwise to try and predict what they’d look like or how they live or what the mechanisms behind their intelligence might be.