You know how Turning Point USA has a McCarthyite list of academics they don’t like, and also publishes the salaries of those faculty? I guess it’s to make citizens outraged at how much money they’re paying to support radicals in the ivory tower. Just to put it all in perspective, though: 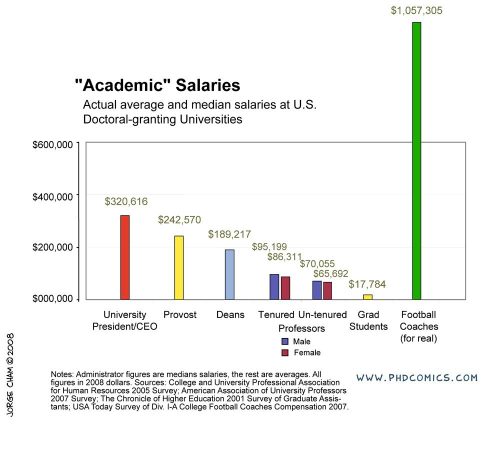 Those football coaches are probably more conservative than the professors, though, so that makes it all OK.

I thought about it some more. It’s not going to work. There are 1½ million professors in the US. If some filthy rich multibillionaire decided to try and influence us all by sinking a billion dollars into bribing us that would only be $666 each, in a one-time investment in one year.

Suddenly it all makes sense. Far cheaper to buy a few influencers, give them a prop fake university — a Prager U or some right wing think tank — and get them to spend all their time promoting pseudo-intellectualism to the rubes. In case you were wondering what the Intellectual Dark Web is actually all about.

Vera is a beast » « ASMR for engine nerds