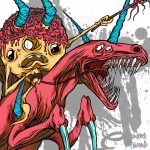 Facebook is objectively evil. But at the same time, it’s so delicious. It’s like an evil donut that you can’t resist nibbling on, but it’s going to kill you in the end. I have friends on Facebook! It’s where I go to get my grandbaby photo fix! I have connections there!

But now I’m thinking I really ought to #DeleteFacebook. The arguments are annoyingly strong.

Some say, “I don’t want to stop using Facebook, I want them to change.” And that is wrong. Keeping up with your friends is good. But Facebook’s business and data model is fundamentally flawed. For you, your data is who you are. For Facebook, your data is their money. Taking it from you is their entire business, everything else is fancy decoration.

Others will say, “I need Facebook because that’s where my audience is, and my livelihood depends on that.” And it is true. But depending on Facebook is not safe in the long-term, as others have learned the hard way. Ever changing, opaque algorithms make it harder and harder to reach “your” audience. So even in this case it’s wise to look for other options and have contingency plans.

It would make it easier for me to leave if all of you would go, too, because it’s not Facebook I like (it’s evil, remember), it’s the people. We need an alternative, but the Zuck seems to have devoured them all. Is there something similar emerging from the non-corporate world, like Mastodon, the better Twitter alternative?

Need popcorn, this is going to be better than the original creationist movie » « New professorial challenges for those teaching philosophy