I guess it was predictable: the quackery on display at Gwyneth Paltrow’s ridiculous goop site has been receiving a lot of well-deserved mockery, and you knew that they weren’t going to simply accept this threat to their credibility and profit by changing their approach and offering legitimate, evidence-based health claims — they’re doubling-down with an extra helping of indignation. So they’ve fished up some people with degrees (please, don’t dignify them by calling them doctors) to defend bullshit. So, for instance, they have a lengthy defense of homeopathy that is straight-up flagrant nonsense

In most countries outside the United States, homeopathics are the first line of defense against ailment, from the common cold to bruising to muscle pain. And since they offer such a gentle but effective path to healing, they’re a great starting point for anyone dipping their toes into alternative medicine—that, and the fact that they’re easy to find, safe to self-treat, and inexpensive. Dr. Ellen Kamhi, a long-time herbalist and holistic nurse (she also leads incredible trips that explore ancient healing arts in indigenous cultures), has been treating illnesses big and small with homeopathics for more than 40 years.

Homeopathic medicines are just water. Sure, they’re gentle, but they’re not effective at all.

But the real fun begins on their new page where they try to specifically address criticisms by deploying a series of statements from quacks. Oh, boy!

As goop has grown, so has the attention we receive. We consistently find ourselves to be of interest to many—and for that, we are grateful—but we also find that there are third parties who critique goop to leverage that interest and bring attention to themselves. Encouraging discussion of new ideas is certainly one of our goals, but indiscriminate attacks that question the motivation and integrity of the doctors who contribute to the site is not. This is the first in a series of posts revisiting these topics and offering our contributing M.D.’s a chance to articulate theirs, in a respectful and substantive manner.

They are very unhappy with Dr Jen Gunter, a real doctor who has made strong fact-based criticisms of the crap sold at goop. In particular, how dare she diss their magic jade eggs, nice porous stones which they recommend that women stuff up their vaginas.

Last January, we published a Q&A with Shiva Rose about her jade egg practice, which has helped her (and legions of other women who wrote to us in response) feel more in touch with her sexuality, and more empowered. A San Francisco-based OB-GYN/blogger posted a mocking response on her site, which has the tagline: “Wielding the Lasso of Truth.” (We also love Wonder Woman, though we’re pretty sure she’s into women taking ownership of female sexual pleasure.)

There was a tremendous amount of press pick-up on the doctor’s post, which was partially based on her own strangely confident assertion that putting a crystal in your vagina for pelvic-floor strengthening exercises would put you in danger of getting Toxic Shock Syndrome—even though there is no study/case/report which links the two—and also stating with 100 percent certainty that conventional tampons laden with glyphosate (classified by the WHO as probably carcinogenic) are no cause for concern. Since her first post, she has been taking advantage of the attention and issuing attacks to build her personal platform—ridiculing the women who might read our site in the process.

Oh, dear. Dr Gunter must hate women’s sexuality. How else to interpret someone who opposes stuffing random objects up one’s hoo-hah? Next thing you know, Dr Gunter will show how much she hates my masculinity by telling me I should stop eating 10 pounds of bacon a day, and that my practice of swinging a chainsaw from my penis doesn’t make me more manly.

Actually, if you read her post on the jade eggs, she isn’t complaining about women’s sexuality — quite the opposite — but is offering sensible advice, “jade is porous which could allow bacteria to get inside and so the egg could act like a fomite. This is not good, in case you were wondering. It could be a risk factor for bacterial vaginosis or even the potentially deadly toxic shock syndrome.”

She also does not endorse using glyphosate-soaked tampons up there. She does point out that the dubious report that tampons are full of glyphosate actually just shows that they have the same amount of glyphosate as the general background level, contrary to the absurd histrionics of goop.

But the best part is the tone trolling of Steven Gundry.

First, Dr. Gunter, I have been in academic medicine for forty years and up until your posting, have never seen a medical discussion start or end with the “F-bomb,” yet yours did. A very wise Professor of Surgery at the University of Michigan once instructed me to never write anything that my mother or child wouldn’t be proud to read. I hope, for the sake of your mother and child, that a re-reading of your article fails his test, and following his sage advice, that you will remove it.

No! The F-bomb? Quick, someone get Gunter’s degree retracted. She said “fuck”!

What’s funny about this is that, naturally, they don’t bother to link to the disgraceful doctor’s post where she inflicts that horrific word on her gentle readers. Here it is.

It’s a response to St Gwyneth saying If you want to fuck with me, bring your A-game. Gwyneth! Wash your mouth out with herbal soap! Your entire site is discredited in the eyes of Steven Gundry because you used a naughty word! 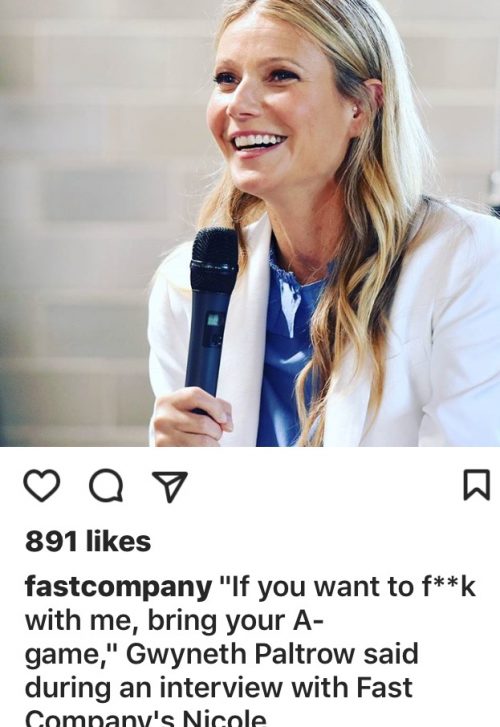 Of course, right there on the same page, there is a direct link to let you buy a jade egg for your crotch for $66. They’re still missing an opportunity to sell chainsaws with a crotch strap.

I think I’ll favor medical advice from real doctors, even ones who might sometimes use a four letter word, over that of pompous cranks trying to grift their way to profit with dangerous pseudoscience, hawked by a college drop-out actress.

Jen Gunter has written a response to goop. It’s a corker. You should read it.