I have sad news, everyone. Ken Ham has finally blocked me on Twitter, so now I’m getting all the humorous Answers in Genesis news second hand…like this glorious announcement. The Ark Park has a new exhibit! It’s a diorama showing the wicked antediluvian humans putting on gladiatorial games, with dinosaurs. 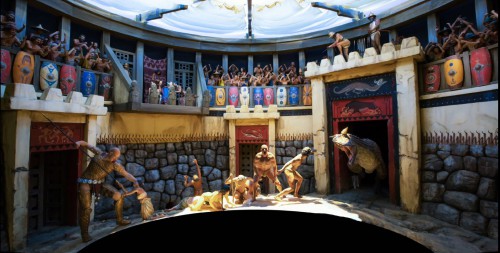 That is so damned Biblical that I think I shat out a prophet while I was laughing so hard.

Although, I have to admit that it is amazingly cinematic. Imagine how much better the gladiator scenes in HBO’s Rome or that Spartacus series would have been if they’d occasionally brought a T. rex into the arena.

It also reminds me of the fabulous (in all meanings of the word) Jim Pinkoski, he of pygmies and dwarfs fame, who invented this spectacular scene for the end of his Noah’s Ark comic book in which fallen angels mounted on dinosaurs attacked the Ark to prevent it from sailing.

Religion just means that you get to make everything up.