This great dead beast greets me every morning — it’s a cast of a Triceratops skull mounted across the atrium from my lab. It’s impressively large. 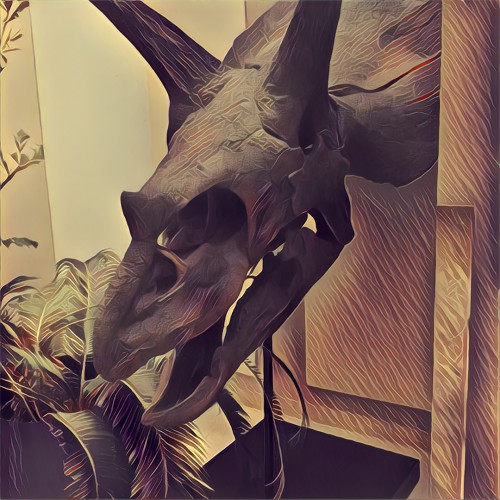 One thing has always bugged me about it, though. See that tiny hole directly under the horns? That’s the eye socket. It has a beady-eyed look, like mere eyeballs were an afterthought to long pointy sharp horns.

But then you go forward from there, and what you see is this massive cavity where the nostrils would go. It’s freakin’ huge. You could fit both hands in there, and it goes all the way through the skull. I’m a moderately gracile human being with a skeleton that’s delicate and fragile compared to a dinosaur’s, and I don’t have a giant gap in my facial bones that you could punch through without smashing up a few bones. 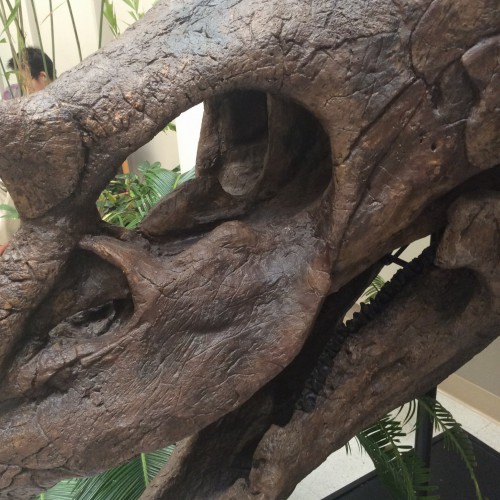 What’s up with that, I’ve always wondered. There must have been some impressive fleshy tissue in there, associated with olfaction? Or thermoregulation? Or what? Someone really needs to get right on that time machine idea.

I don’t know. It kind of detracts from the majestic dignity of the animal to imagine it puffing out what would look like a gaudy snot bubble to appeal to a mate. What self-respecting beast would do that?

Next thing you know, these paleo guys will be dressing dinosaurs up in flamboyant plumage. No dignity left at all.