Indignant conservatives who insist on “accuracy” in television shows make me laugh. Apparently, the BBC has some show about Margaret of Anjou in which the title character is played by Sophie Okonedo, who is of Nigerian ancestry. Some people can’t get past the skin color to see the role the actor is playing. 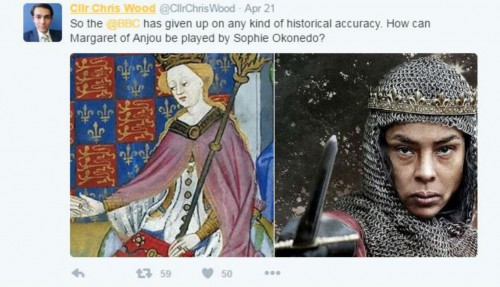 You know, the BBC doesn’t have a time machine in order to pull in the original Margaret of Anjou to play the role, so anyone they can bring in is going to look different than the real person. If they had a white person playing her, would they pick over the shape of her nose, if it wasn’t identical? Nigel Farage is white, would he have been a better choice as an actor?

But here’s something even funnier: a medieval historian who wrote a thesis on the manuscript Mr Wood cited as the authority on how Margaret ought to look weighed in.

Hi @CllrChrisWood that's a lovely medieval image you have there. It's from a manuscript that claims M of Anjou was descended from a swan

Hi @CllrChrisWood that’s a lovely medieval image you have there. It’s from a manuscript that claims M of Anjou was descended from a swan

I must insist on true historical accuracy in all future documentaries, and apparently a significant fraction of British royalty must be portrayed as part bird.

Also as part French. Margaret of Anjou was born in France (well, Lorraine), and was of the French house of Anjou-Valois. A UKIPper defending the accuracy of a television show is going to have to insist on hiring French actors, I guess.