Brandenburg is a physicist who submitted a paper to the 42nd Lunar and Planetary Science Conference a few years ago. It’s way outside my area of expertise, but it postulated an interesting scenario from the ratios of rare isotopes in the atmosphere of Mars: that there was evidence of a natural nuclear reactor, like Oklo on Earth, that had exploded over 180 million years ago. He makes a good case, at least to this biologist’s eyes, and it seems reasonable.

Natural Nuclear Reactors formed and operated on Earth, there is no reason this could not have happened on Mars. Conditions on Mars: lack of plate tectonics, and nearness to the asteroid belt, may have favored such occurrences in larger size and duration than on Earth. Changes in groundwater distribution, due to either climate change of loss of geothermal heat, may have triggered this event. The occurrence of such a large natural reactor may explain some puzzling aspects of Mars data, such as the superabundance of K and Th on the surface and the large inventory of radiogenic isotopes in the Mars atmosphere.

See? An interesting hypothesis backed by a rational analysis of the evidence. He also has some estimates of the size of the natural reactor, about 0.14 cubic kilometers, which sounds feasible, yet is sufficient to cause a planetary catastrophe. That’s how Brandenburg talked to his fellow physicists, I guess.

That was in 2011. Now, in 2014, his story has metastasized. In a presentation to the APS, he proposes now that the isotope ratios indicate that there was a nuclear war fought on Mars.

Analysis of recent Mars isotopic, gamma ray, and imaging data supports the hypothesis that perhaps two immense thermonuclear explosions occurred on Mars in the distant past and these explosions were targeted on sites of previously reported artifacts. Analysis rules out large unstable “natural nuclear reactors” [1], instead, data is consistent with mixed fusion-fission explosions [2]. Imagery at the radioactive centers of the explosions shows no craters, consistent with “airbursts.” Explosions appear correlated with the sites of reported artifacts at Cydonia Mensa and Galaxias Chaos [3], Analysis of new images from Odyssey, MRO and Mars Express orbiters now show strong evidence of eroded archeological objects at these sites. Taken together, the data requires that the hypothesis of Mars as the site of an ancient planetary nuclear massacre, must now be considered. Fermi’s Paradox, the unexpected silence of the stars, may be solved at Mars. Providentially, we are forewarned of this possible aspect of the cosmos. The author therefore advocates that a human mission to Mars is mounted immediately to maximize knowledge of what occurred.\\[4pt] [1] J. E. Brandenburg “Evidence for a large Natural, Paleo- Nuclear Reactor on Mars” 42$^{nd}$ LPSC (2011).\\[0pt] [2] J.E. Brandenburg, “Anomalous Nuclear Events on Mars in the Past”, Mars Society Meeting (2014)\\[0pt] [3] J.E. Brandenburg, Vincent DiPietro, and Gregory Molenaar, (1991) “The Cydonian Hypothesis” Jou. of Sci. Exp., 5, 1, p1-25.

“Artifacts”? “Archeological objects”? What “artifacts”? He’s talking about the Face on Mars. Seriously, it’s 2014, and a physicist is still accepting that bit of pareidolia. There’s no more talk of natural reactors. Instead, he’s claiming the Face on Mars was targeted by an alien galactic civilization for nuking. Just the fact that he’s still arguing that a lumpy eroded hill looks kinda facelike at low resolution (it doesn’t in any of the subsequent clearer photos) as evidence of a humanoid civilization on Mars tells you he’s a kook. 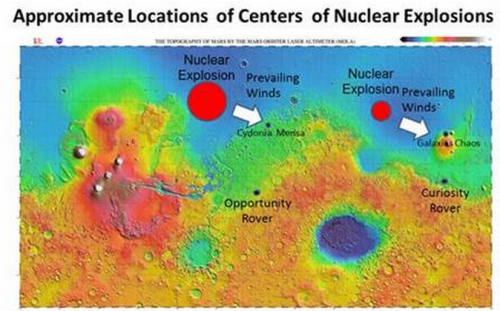 Brandenburg did an interview for Supreme Master TV (yeah, it’s some weird cult). It just gets crazier.

His story now is based on science fiction: he thinks there is a hostile alien civilization out there with plans to kill us all.

Given the large amount of nuclear isotopes in Mars atmosphere resembling those from hydrogen bomb tests on Earth, Mars may present an example of civilization wiped out by a nuclear attack from space, he wrote.

It is possible the Fermi Paradox means that our interstellar neighborhood contains forces hostile to young, noisy, civilizations such as ourselves, he added. Such hostile forces could range from things as alien as AI (Artificial Intelligence) ‘with a grudge’ against flesh and blood, as in the movie Terminator, all the way to things as sadly familiar to us as a mindless humanoid bureaucrat like Governor Tarkin in Star Wars, eager to destroy planet Alderann as an example to other worlds.

There. You know he’s not competent because he can’t even spell “Alderaan”.

And of course, the Daily Mail is happy to promote this crap. It’s hard to sink much lower than that. But he’s going to. He has announced that he’ll be publishing his story in the Journal of Cosmology. That’s right, this Journal of Cosmology. I don’t think you can dredge any deeper into the muck.

It’s depressing. He was a smart guy, now he’s just a screwball fruitbat.