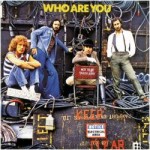 This is another of those social, community threads. Introduce yourself, say what your interests are, what brings you here, whatever you feel like. No arguments, no wrangly discussions, no debate, no crankiness allowed. Consider this a chance for newbies to say something where they won’t get pounced on, and for the regulars to leave a calling card.

Pity and pitilessness » « What have I been doing this weekend?