Red hair. Freckles. Pale skin. Soulless. What good are they?

Seriously — I have a red-haired son and brother and cousins, and you’ve got to wonder why evolution has spawned all these strange color variants — there’s no known advantage to ginger-ness, and plenty of disadvantages. 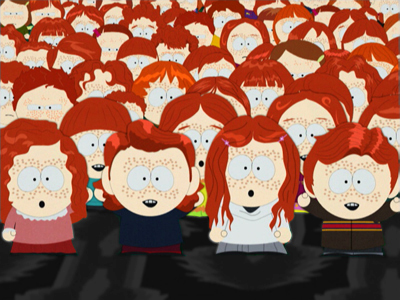 The biochemical cause of these differences are known. Pigmentation is produced by the deposition of a complex light absorptive polymer called melanin in cells. We vertebrates produce primarily two forms of melanin, eumelanin and pheomelanin.

Eumelanin is a dark pigment; cells loaded up with it look black or dark gray. If you’re dark-haired, it’s because the keratinocytes are stuffed full of eumelanin, which is also an excellent barrier to UV damage.

Pheomelanin is a reddish-brown pigment. We all make it to varying degrees — nipples and lips get their reddish color from it — but some people make it in much larger quantities than they do eumelanin. Red hair is stuffed full of pheomelanin rather than eumelanin.

But here’s the thing: pheomelanin is a lousy barrier to UV. In fact, pheomelanin is prone to photodamage (exposure to light causes it to break down) that produces carcinogenic byproducts. It’s also synthesized biochemically by a process that consumes glutathione (GSH), an important cellular anti-oxidant. So making red hair actually depletes the body of a protective substance, and has the side-effect of producing carcinogens. 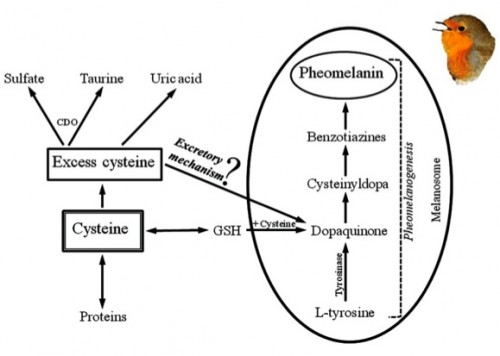 Chart showing the physiological activity of dietary cysteine. This amino acid is used for protein synthesis, and can be recovered by protein breakdown. It is also used for the synthesis of reduced glutathione (GSH), which is the main storage of cysteine and thus also acts as a source of cysteine. When the levels of cysteine are higher than required for these functions, especially for protein synthesis, excess cysteine occurs. This excess, which can be toxic, is partly eliminated by cysteine sulfoxidation, a process mainly catalyzed by cysteine dioxygenase (CDO) in which less toxic products than cysteine such as sulfate and taurine are formed. In birds, excess dietary amino acids are also diverted to the synthesis of uric acid, the main product of excretion in birds. Cysteine also reacts with dopaquinone thus participat- ing in the synthesis of pheomelanin that takes place in melanosomes. If cysteine incorporated into the pheomelanogenesis pathway comes from an excess pool, then pheomelanogenesis could represent an excretory mechanism of cysteine and an adaptive process that may explain the evolution of pheomelanin.

You see the problem: WHY DO GINGERS EVEN EXIST? It just seems to be a bad thing all around.

I can give you a couple of hypothetical reasons, though.

That last hypothesis is interesting because it fits with a couple of observations, and also makes some predictions.

Why would you need a pathway to get rid of cysteine? Well, just on general principles you’ll often see pathways that balance the synthesis and breakdown of compounds in the body, but also there is some evidence that excess cysteine contributes to some diseases: In birds, there is clear physiological evidence that excess cysteine levels contributes to metabolic acidosis, thinning of egg shells, and growth inhibition. In humans, elevated cysteine levels are associated with rheumatoid arthritis, Parkinson’s and Alzheimer’s disease, cardiovascular disease, and systemic lupus erythematosus. There has not, however, been any evidence yet that being a ginger reduces the incidence of those diseases, and also note that these are diseases of the aging, and are less likely to have been a source of significant selection pressure in human evolution.

It’s also an open question that the authors of this proposal ask: “if pheomelanogenesis has adaptive value because it removes excess cysteine, do pheomelanic humans (i.e. phenotypes typically having red hair, fair skin, freckles, and green irides) avoid risk of diseases associated with excess cysteine more easily than eumelanic individuals?” This question hasn’t been answered yet, so at this point that third explanation is very much a tentative hypothesis looking for verification.

So, all you lovely red-haired people, there might actually be an advantage to your coloring…but what you really need to know is that you should minimize exposure to the sun!

But you already know that from experience, I’m sure.

Galván I, Ghanem G, Moller AP (2012) Has removal of excess cysteine led to the evolution of pheomelanin?: Pheomelanogenesis as an excretory mechanism for cysteine. Bioessays 34: 565–568.

I must include a counterpoint from Tim Minchin.

The Blaze has a poll to show they don’t like atheists – surprise! » « Episode CCCXXXXI: The backwater gospel