I vividly recall the first time I encountered a cicada killer, the amazing huge solitary wasp. I was in eighth grade; I was bumming about in our backyard, not doing much of anything, when I heard this loud clattering buzz overhead, looked up, and saw this giant beast slowly cruising towards our apple tree. It looked like something that ought to be accompanied by Flight of the Valkyries, an armored predatory monster determinedly homing in on its helpless prey. It disappeared into the foliage and then reappeared a moment later carrying a cicada that looked to be twice its size, and it landed on a branch overhead and started chomping. I could hear its jaws cracking open the bug from the ground. It just shredded its meal — and it wasn’t tidy, either. Bits of dead cicada came fluttering down around me. I was frantically looking about the yard for something I could use as a club in case it turned its dead glittering eyes on me.

And ever since that day it has been my dream to grow up and become a Sphecius wasp, a cold, brutal killer capable of rending my enemies into shattered fragments with heedless indifference, inspiring terror in all who behold me. Until now. A new species of wasp has been discovered in the fierce jungles of Indonesia. 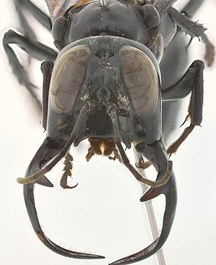 Behold the dreaded killer of Sulawesi.

The male measures about two-and-a-half-inches long, Kimsey said. “Its jaws are so large that they wrap up either side of the head when closed. When the jaws are open they are actually longer than the male’s front legs. I don’t know how it can walk.”

Its jaws are longer than its legs. Awesome. I’m in love.

Anti-Caturday post » « The world is upside down in Kentucky