When I was a child, I spent a lot of time wandering around in some of the forests and wetlands in the greater Boston area. One of my earlier memories was seeing a snapping turtle crossing the newly paved Minuteman Bikeway.

Somewhere between kindergarten and second grade, I was walking down a stream near my school, using a stick to help balance as I went. I poked it down into a dark pool against the bank, and something grabbed my stick and gave it a good jerk. There’s something special about the shiver of startlement that runs over you when you realize that in that alien world, just on the other side of the stream’s surface, there’s something watching you. Something as strong as I was – maybe stronger – had just seized hold of my stick, and I couldn’t get it back until whatever creature was lurking below let go.

Thinking on moments like that, it’s easy to see how legends would spring up of water spirits who attack the unwary. 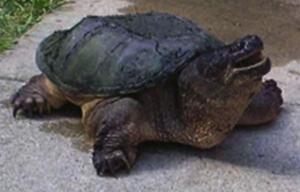 I don’t know if that was my first encounter with a snapping turtle, but it was probably my most intense one. Some time later, I saw another snapper crossing the Minuteman Bikeway in the early morning sun. Wisps of steam rose from the ground, catching the light, and there was this massive creature, dragging itself across the misty pavement. Looking back, it was probably around 20lbs or so, but to a kid somewhere between 8-10 years old, that’s pretty big. For me, it was like encountering a dinosaur, and the strength of the grip that had seized my walking stick made perfect sense.

From there, it was easy for me to see a massive Stupendemys carapace, and imagine those still lurking in lakes and rivers around the world, or larger ones still in the vastness of the oceans. As a child, island-sized turtles with forests on their backs seemed like a reasonable possibility, considering some of the creatures I knew to exist.

Many years later, after handling large numbers of turtles for research, there was still that thrill as I watched a big snapper slide into the water. For just a moment, I could be standing on a cliff, high above the lake watching some massive, ancient creature slipping into the black depths, leaving me with only a tall tale and an echo from millions of years ago ringing in the back of my mind.

What good is a turtle? Why should we care whether there are turtles in the world? The default answer, in a world reduced to monetary value, is that we should care because they are a part of the global ecosystem that supports our modern civilization. They fill a wide variety of niches, both as consumer and as prey, they shape the landscape around them with burrows, nests, and digging for food. As with any system, remove a major part, and the rest must compensate or crumble; the system as a whole becomes less resilient and more vulnerable to future shocks.

A paper recently published in the journal Bioscience takes a look at the ecological roles played by turtles around the world, as well as chronicling the stark decline of a majority of turtle species:

Of the 356 species of turtles worldwide, approximately 61% are threatened or already extinct. Turtles are among the most threatened of the major groups of vertebrates, in general, more so than birds, mammals, fishes or even the much besieged amphibians. Reasons for the dire situation of turtles worldwide include the familiar list of impacts to other species including habitat destruction, unsustainable overexploitation for pets and food, and climate change (many turtles have environmental sex determination). Two notable characteristics of pre-Anthropocene turtles were their massive population sizes and correspondingly high biomasses, the latter among the highest values (over 855 kilograms per hectare) ever reported for animals. As a result of their numerical dominance, turtles have played important roles as significant bioturbators of soils, infaunal miners of sea floors, dispersers and germination enhancers of seeds, nutrient cyclers, and consumers. The collapse of turtle populations on a global scale has greatly diminished their ecological roles.

Understanding the role turtles play, or used to play, in our world is important, but it’s of less value as an argument than I used to believe. This is partly because the people who demand economic justifications for pro-environment policies don’t actually want what they’re asking for. What they want is to be able to do whatever they think will get them money, no matter the damage done. Anti-environmentalism seems to have become an ideology detached from any real concern for the monetary value of things. At this point, anti-environmentalism seems to be so rooted in spite, that no reason is needed anymore. For them, upsetting environmentalists is reason enough to pave over the world.

I think acknowledging that is somewhat freeing. It means that we can turn to the aesthetic and emotional value of the world we live in. I think this side of things has been too neglected in the last few generations. While we may be meat machines, our emotional experience is as much a part of us as our bones, and turtles have been part of the world we live in since our ancestors looked something like this:

Throughout our evolution, turtles were always there. We ate them and their eggs. Far back in evolutionary history, they almost certainly ate us. As the eons wore on, and we began to develop a collective memory through the development of language, they filled our legends, alongside the other ancient beings that surrounded us.

It now seems possible that these living windows to the ancient world will be gone in my lifetime. At some point, someone will watch a turtle slip beneath the surface, and from that moment on, no one will ever see one in the wild again. There will be rumors, as there have been with the Ivory-billed woodpecker, and stories about people looking for some last refuge where turtles still thrive- Efforts to tell ourselves that we didn’t really do it. We couldn’t really wipe out another whole group of creatures with as long and rich a history as our own, right? And then just as with so many others before, the last ones will die in captivity, leaving only remains and human records to show that they ever existed in the first place.

When we first realized that we were capable of driving whole species to extinction, that was a warning sign. That was a moment when we should have begun to take seriously our own power, and the responsibility that came with it. It’s a lesson we have yet to learn, as a species, despite the breathtaking growth in our ability to influence the world around us. Will all the turtles actually go extinct? I have no idea. It’s certainly within the realm of possibility, though, and that’s cause enough for concern itself.

Amphibian Extinction: Climate change isn’t the only problem » « Corporations are not friends, my people.