I have been incredibly busy, so I am way behind on my posts.  This one is not even done, so I have to break it up into portions.  This is a breakdown courtesy of the latest scientific research on how we respond to signals that we “aren’t enough” or are “less than”.  It is fascinating how we evolved to actually care what others think.  I will save the why we care what others think for the next post.

This is a follow-up to my posts on criticisms and on Jonathan Haidt’s analysis of microaggressions.  Haidt believes that we should desensitize ourselves to criticisms and insults and not be a part of the callout culture.  I agree with his advice that it is better to learn how to cope with criticism than shield ourselves from it.  However, there are groups of people that are vulnerable to pervasive insults and shaming, like minorities, LBGTQ+, or undesirable others, who may benefit from protection in hopes that they can rise in political and cultural status.  This becomes a challenge since many believe it is a fundamental right of freedom of speech to be able to put down others.  If a criticism bears truth, then it is our right to disparage others, especially if they or their attributes are inferior or inadequate.  This can be settled by one question.  Is our goal in life to be right or to get along with others?

How We Respond to Criticisms and Insults

Criticisms are when we “find fault” in something or someone.  Everything else is a variation on the criticism but expressed with various intentions, emotions, subtleties, and body language.  It becomes abusive if we want to inflict emotional harm (i), which is a form of emotional abuse.  Abusive criticisms can be formed as insults, humiliation, epithets, disparage, ridicule, contempt, mocking, teasing, innuendo, slur, and sarcasm.  A stipulation is that the attack must be on our appearance, abilities, character, intelligence, or affiliations.  These areas are vulnerable because we do not want to be exposed as “less than” or “not good enough” to some desirable standard.  We do not like to deviate from desirable standards because we can feel shame, hurt feelings, and anger.

Take an insult that Donald Trump has said to Robert Denerio and Mika Brzezinski, “You are a low IQ individual.”  This is an abusive criticism, namely an insult, because it is meant to inflict emotional harm, but it may not be a criticism in the strict sense.  It is criticism if there is truth to it, which lies within the perception of others.  Knowing Trump, this insult was uttered with the emotion of contempt to add to its effect.  Contempt signals that we are not worthy of consideration since we or are attributes are inferior.  What about the insult that those are “shithole countries?  Since our place of origin and culture are tied to our identity, then we should be offended.  Even though this is not a direct criticism, we can feel shame by virtue of identifying with an inferior place or group.

Let us say we made a mistake at work and someone said that we were “careless and dumb”.  This is a clear insult but could also be a legitimate criticism if that is how we are perceived.  If it is something that we hear a lot, there may be some truth to it.  But how do we process this?  Initially, we may not process the threat entirely.  The brain will realize,  however, that it is a threat to our self-worth, and we will feel anger because we externalize the event—that is, it is coming from a source that is not us.  Anger is the emotion of self-preservation, and it tells others that we won’t be pushed around.  But responding to a perceived slight with anger is unacceptable at work, and we know this unconsciously.  The only other option is to attribute the slight to internal causes.

If we attribute it to our abilities or intelligence, things out of our control that cannot be changed, we will feel shame.  If we attribute it to us not trying hard enough, things within our control, then we feel guilt.  That is not all.  If we process this as the person no longer holds us in high esteem or values us, then we can feel hurt feelings.  Narcissists, on the other hand, deflect criticism with hubristic pride. 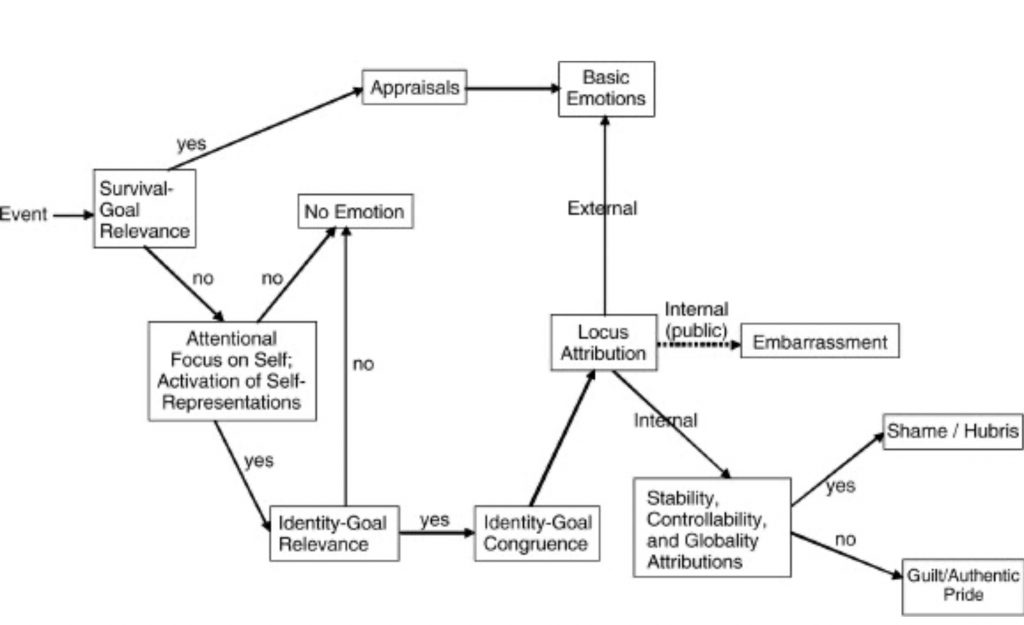 What if it is generally believed that we are ugly, stupid, inadequate, or undesirable?  People of course fall on a continuum within these categories, but we think categorically and stereotypically.  We are either in or out of a category.  He is attractive.  He is not attractive.  He is smart.  He is not smart.  There must be some threshold within the continuum that allows us to make these black or white appraisals.  Therapists, however, warn of global or black-and-white words because they can induce the emotion of shame.  Why do they induce shame?  Because if it is us, which global words necessarily imply, then we are forced to make a global attribution and feel shame as a consequence.  If we instead said that certain aspects of us are ugly or dumb, then we may not trigger shame.  It is the extent to which the internal attribution is stable, controllable, and global.  And “the degree to which shame becomes spread to a global sense of self depends on the meaning and values of the roles and attributes that are deemed important for self-definition and identity [1]”.