The film “9 To 5” was released on December 19, 1980. If you’ve seen it, you know why it’s great. If you haven’t seen it, you need to watch it.  It wasn’t just great comedy, it represented (and caused) a sea-change in how working women are treated in the real world and in film.

And not just because the three women kidnap their unspeakable boss.  More below the fold. 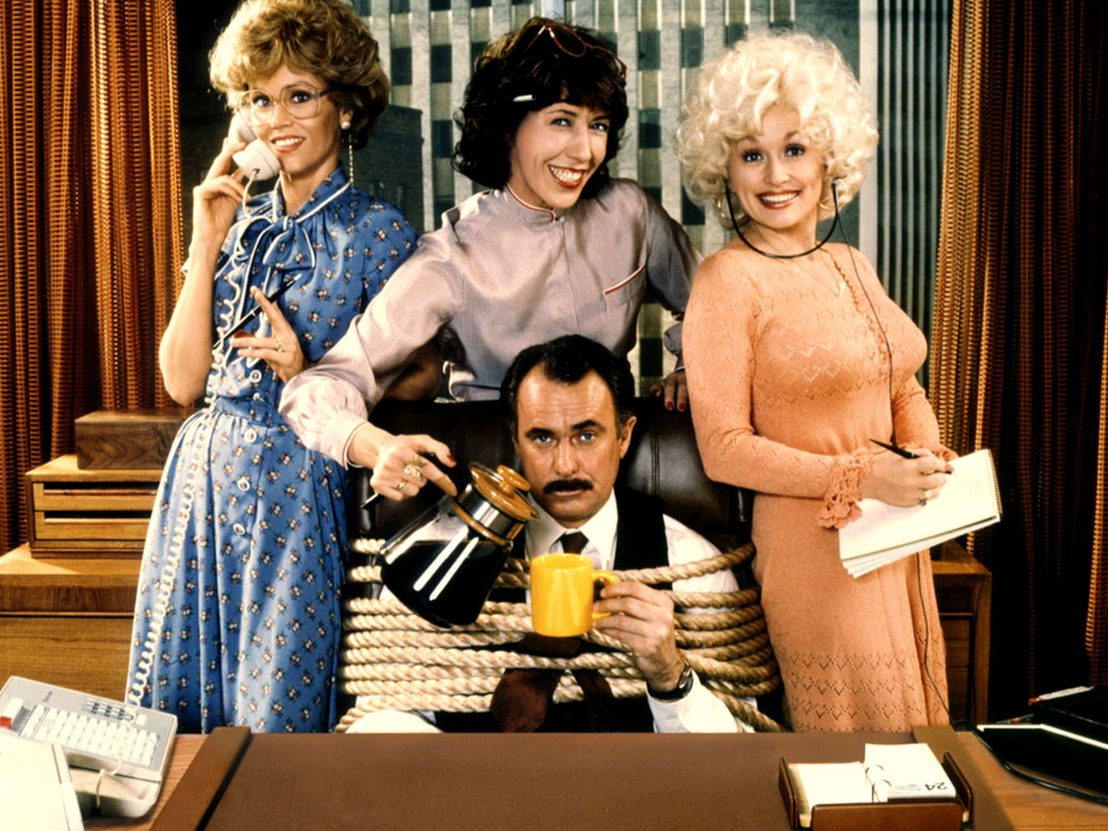 The casting was incredible: Jane Fonda as a prim divorcee forced back to work, Dolly Parton in her first feature role, Lily Tomlin playing a character as outspoken as she is, and Dabney Coleman playing a despicable office taskmaster.  It’s one of the best comedy foursomes, ever.  And the film passes the Bechdel Test many times over.

How a socialist feminist fantasy kickstarted a trend for female-fronted mainstream comedies.

Developed and produced by Jane Fonda, directed by Colin Higgins and co-written by Patricia Resnick, 9 to 5 centres on a trio of female office workers beleaguered by their “sexist, egotistical, lying, hypocritical bigot” of a boss (Dabney Coleman). There is Judy (Fonda), a prim divorcée forced to return to work, Violet (Lily Tomlin), a straight-talking senior employee who watches with gritted teeth as her male colleagues climb the company’s ranks, and Doralee (Parton, in her first feature film role), a buxom blonde on the receiving end of a leering boss and jeering, gossipy co-workers.

The three end up bonding over a shared hatred off their boss, getting stoned and swapping revenge fantasies after work.

Released in 1980, 9 to 5 kicked off a run of office comedies about white, white-collar women workers that would continue throughout the decade. These comedies were a direct response to the women’s liberation movement of the 1970s. As women began to grasp newfound social and sexual freedoms, filmmakers began exploring their professional desires, anxieties and oppressions. With its cartoonish humour and slapstick hijinks, the broad comedy of 9 to 5 feels somewhat removed from the workplace-set rom-coms that followed it. Yet what really distinguishes 9 to 5 from later films like Baby Boom or Working Girl is its politics. With its prankish anarchy, sisterly solidarity and unionisation of the workforce, 9 to 5 is a utopian socialist feminist fantasy. Even Parton’s tongue-in-cheek lyrics serve as a playful backslap of anti-capitalist solidarity.

Forget Mary Tyler Moore’s mere 1970s ambition of just having a job, the message of “9 To 5” was about the fight to be respected and not subjected to “old boys” sexism.  It was a new and powerful message in its time.  Society still isn’t where it should be, but change has happened.

Below are the original film trailer, the classic “Rooster to a hen” scene.  I’ll bet every man covered himself when Dolly Parton spoke those words.