Zork (later called Zork 1) was released by Infocom in December 1980. 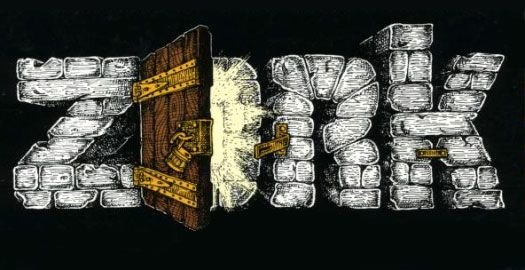 By today’s standards, Zork was exceedingly primitive: an Interactive Fiction game where you typed in your commands and the basic language parsing system responded.  There were no graphics, no sound, only a screen of text and a score counter.  And yet it became an instant classic in computer gaming because it was one of the first immersive games ever made.  You felt like you were entering another world, and acting within it.  You are about to be eaten by a grue. 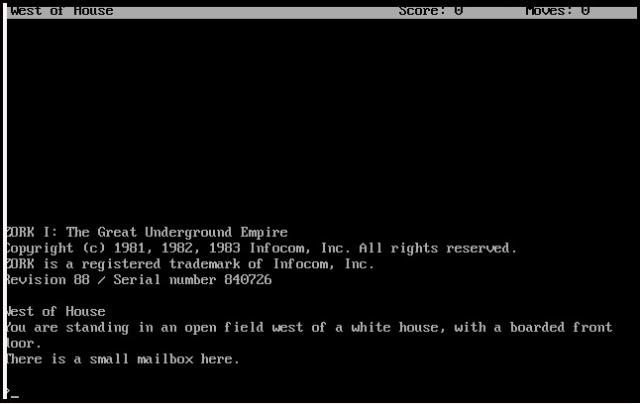 Zork was not the first IF game.  It’s actually a rewrite of an earlier games, Colossal Cave Adventure (or just Colossal Cave) from 1976.  Will Crowther and Don Woods created Colossal Cave based on their own play of Dungeons and Dragons, and being spelunkers themselves.  They helped develop the ARPANET.

Zork wasn’t the only descendant of Colossal Cave.  Sierra Online’s Mystery House (1980) took the next step, adding primitive still graphics to IF games.  Rogue (1980) was an early dungeon crawler that tried to bring graphics and customizable detail to gaming, leading to games like Wizardry, Ultima and many others that followed. The 1980s were dominated by point-and-click adventures (e.g. “Day Of The Tentacle”, “Deja Vu”) that also game out of IF.

Interactive Fiction may not sell big anymore, but it’s not a dead art form.  There are several Interactive Fiction engines and thousands of fan made adventures that work on them.  Nearly all are open source and free to download and play.

What is Interactive Fiction? is an introduction to the genre.

The Interactive Fiction Archive is a collection of games and engines.

The Interactive Fiction Database is another collection of games and engines.

The Interactive Fiction Technology Foundation “helps ensure the ongoing maintenance, improvement, and preservation of the tools and services crucial to the creation and distribution of interactive fiction” (sorta like how the W3 sets standards for HTML).

itch.io also has an Interactive Fiction collection to download.

From the MIT Technology Review:

The Enduring Legacy of Zork

In 1977, four recent MIT graduates who’d met at MIT’s Laboratory for Computer Science used the lab’s PDP-10 mainframe to develop a computer game that captivated the world. Called Zork, which was a nonsense word then popular on campus, their creation would become one of the most influential computer games in the medium’s half-century-long history.

During its 1980s heyday, commercial versions of Zork released for personal computers sold more than 800,000 copies. Today, unofficial versions of the game can be played online, on smartphones, and on Amazon Echo devices, and Zork is inspiring young technologists well beyond the gaming field.

It’s an impressive legacy for a project described by its developers as a hobby, a lark, and a “good hack.”