The first rule of any successful business must surely be Don’t Annoy Your Customers.  It’s amazing how many feel they can hurl make false assertions, spew hate speech or engage in flat out discrimination without consequences.

Back in May 2019, the owner of the “Formosa Fitness” gym in Taichung, Taiwan, put up a Transphobic and homophobic post on his business’s facebook page.  Many LGBTQIA people were annoyed and posted negative reviews, myself included.  (There are two images below the fold, hidden to make viewing them optional.)

The owner falsely claimed that gay men were having sex in his gym and predating on others, and that he didn’t want anyone not cisgender hetero binary in his place of business.  I expect he assumed he could lose some foreigners as customers, since he speaks Mandarin.  But what he didn’t account for was the response by Taiwanese people who are mostly pro-equality.  Memberships slowly declined and by November 2019, he was out of business.  Victory.

This past week, several Taiwanese businesses (restaurants and bars) enacted xenophobic and baseless policies, saying “No foreigners without a passport” or “no entry without proof of a departing flight”.  For foreigners who have legal residency visas and did not travel since mid-December, such “policies” are both baseless and illegal as per Taiwan’s Immigration Act, Article 62.  But good luck getting the businesses to listen.

To say they have responded to criticism poorly is an understatement.  Many “doubled down”, banned people who spoke up or wrote negative reviews, etc.  And it’s not just foreigners who have spoken up, Taiwanese people have come to our defence.  The only people these businesses are hurting are themselves: a nightclub, another nightclub, a bistro, another bistro, a bar, another bar, among others.  Some have since dropped the policy or apologized.  Most haven’t.

A friend of mine (who is fluent in Mandarin and a permanent resident) wrote about this on her own blog (linked to with her permission). She gives far more detail than I do here.

This is definitely illegal: 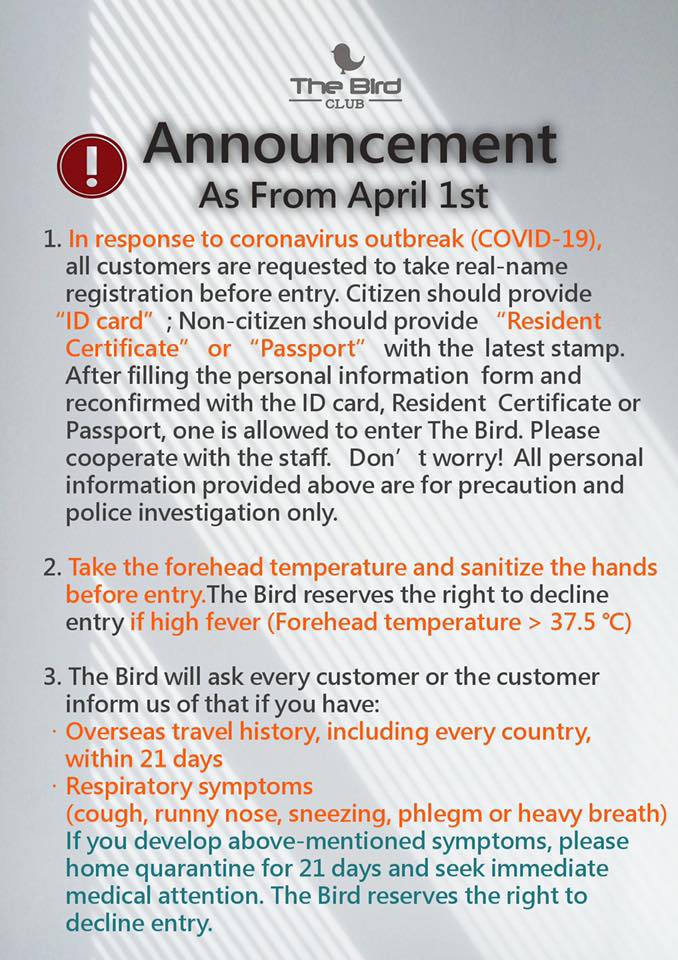 The government has tracked all known cases of COVID-19, and none were brought in by foreigners.  All imported cases were brought by returning Taiwanese citizens; all foreigners were infected locally.

Have there been any infected people in Taiwan who have knowingly broken quarantine?  Yes, several.  One was a woman who went shopping.  A man went to a nightclub because he was bored.  The third was a man who invited friends to his apartment for a party, potentially infecting them.  The first two were fined NT$1 million (US$33,000).  A spoilt 25 year old with rich parents did it twice, but did not receive the most severe fine; many have called for him to be jailed for the remainder of his quarantine.

There was a kerfuffle two weeks ago involving a spoilt 20-something British woman who landed in Taiwan on her way to Australia.  (She did not break quarantine.)  She told her mother she was “incarcerated” and given “inedible food” during her quarantine, and her mother told the BBC.  The Taiwan government showed a picture of the accomodations, a place twice the size of my apartment.  The food, while simple (e.g. boiled, steamed food), did meet the woman’s dietary restictions.  Taiwan has alloted NT$1000 (US$33) per day compensation to those in quarantine, but because of her unjustified complaints, the woman won’t receive it.  The BBC originally reported the mother’s account, but have since deleted it and tried to pretend the page doesn’t exist.

This is a screencapture of the gym owner’s ignorant post. For obvious reasons, it did not go over well. 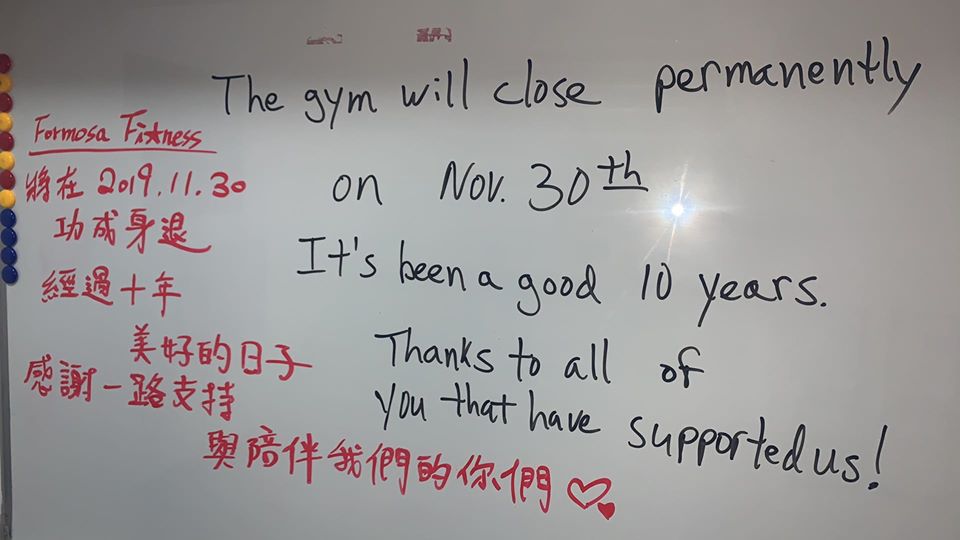