Sunday marks my 53rd birthday.  I’m also celebrating it as the fifth anniversary of my transition, though I usually do that at New Year’s. I don’t remember the exact date that I said, “I have to transition or I’m going to die,” all that matters is that it happened.

I won’t repost it here because it’s too long (a main post, thirteen comments and fourteen video links).  However, everything on the post is “public” so those not logged in can read it (as far as I know), you just can’t react.  I limit comments to my friends list due to harassers and “chasers”.

Though it’s only five years out of fifty three and seems like a short time, the distance I’ve come is amazing: starting out close to a mental breakdown; tentative steps in experimenting with makeup, clothes and wigs; going public; socializing and making friends; living openly full time (aside from work).  The only downer about my time since coming out is that I can’t take HRT.  I did for a few weeks about two years ago, but it put such a strain on my heart I ended up on heart medication for eight months.  (Better, now.)

Out of curiosity, I looked up famous people born on the same day.  Many I’m glad to be associated with, and one, I’m like…aiyah!  No, no, no!  The first name is my favourite of the bunch, though I’ve watched the entirety of “The Doctor’s” career.

It is just me, or does Valentino Rossi look like Krusty the Clown from The Simpsons? 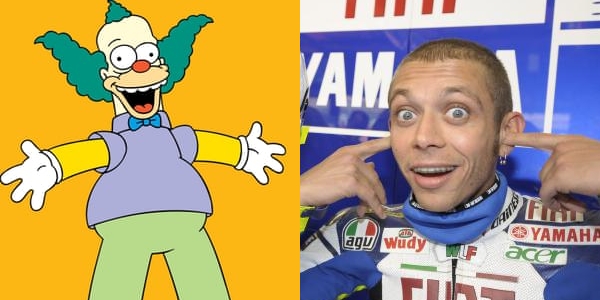 People I’m okay to share the same birthday with:

Those I’m embarrassed to have the same birthday:

Here are some notable historical events from February 16:

1881 – The Canadian Pacific Railway is incorporated and operating. Without the promise of a national railway in 1871, the western half of Canada (BC, Alberta, Saskatchewan, Yukon) would have joined the yanquis. Instead, Canada became a coast-to-coast nation.

1978 – The first computer bulletin board system is created (CBBS in Chicago, which I mentioned a month ago).

about their life.  Unfortunately, I can’t because I have only one photo of myself before 2015, a picture with college classmates.  The rest were ID photos: pics for my passport or other documentation.  I hated the camera when I was hiding from the world.  Now I love it.  (I also suffered data loss due to a crappy Seagate HDD.  Never again, I’ll stick with Transcend, a Taiwanese brand that never gives me trouble.)

Maya Henry is a Canadian Transgender woman (from Ontario) who transitioned around the same time that I did, January 2015.  Hers is one of the first transition videos that I saw.

I have no connection to her and have never contacted her. I just like the video and the fact she was able to do it so young, and had a supportive family.

WHO Understands: If you owe someone, they own you » « How Diseases Taxi: Taiwan’s first COVID-19 death was a cab driver