The MLS’s officious (not a typo) policy on “safety” at their games reads:

MLS and its Clubs will immediately action the following behaviors as they represent a threat to the safety of the event:

Using (including on any sign or other visible representation) political, threatening, abusive, insulting, offensive language and/or gestures, which includes racist, homophobic, xenophobic, sexist or otherwise inappropriate language or behavior

They have yet to explain how anti-racist and anti-gun violence signs are a “threat”.

As I mentioned in an earlier post, fans have been ejected and banned from stadiums for up to three years for waving Iron Front flags.  Meanwhile, MAGAts have not.  Fans leaguewide have begun to walk out in protest, putting aside team partisanship in favour of unified opposition to hypocrisy.

The MLS has (or might have) caved in to the pressure, changing its policy specific to Iron Front imagery, though a permanent policy will undoubtedly be coming.  They might want to ask the fans to write it, especially when the owners still can’t tell the difference between violent racists and non-violent anti-racists. 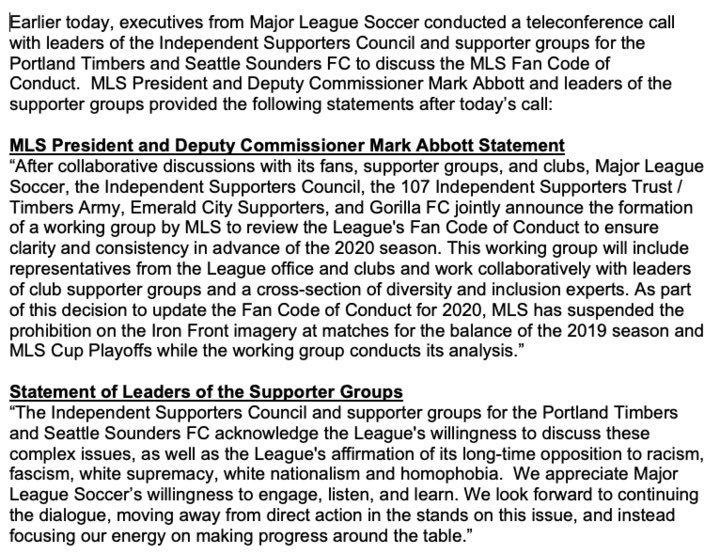 Lifting the ban on the Iron Front logo is a start, as is MLS’s promise to rescind the  suspensions of fans who displayed it. But even better is how the fans’ collective actions around the country made so much noise that it compelled the league to come to them and negotiate.

Rivalry came second to decency among antifa fans, something rightwingnuts cannot grasp nor would ever do.  They’ll stab each other in the back at the first disagreement.

MAGAts are so gutless they won’t even speak publicly under their own names.  Former US national men’s team member Geoff Cameron vehemently denies being the USMNT player who called into a rightwing radio show and told racists to wear MAGA hats to games.  If it’s not true, charlie, why are you so upset?

Cameron, from a Sports Illustrated interview:

“I believe it’s important to support our President whether he was your candidate or not,” Cameron told SI.com’s Grant Wahl. “I am pleased he is making security of all Americans one of his top priorities. Our enemies have stated—and in Europe they have proven—they will take advantage of lax immigration procedures for the purposes of staging attacks. A temporary pause on immigration for the purpose of evaluating and improving vetting procedures makes sense.

Pressed about how he feels about the travel ban nearly a year later, Cameron insisted: “I never said I supported a Muslim ban. I said I support a better vetting procedure. And I still do.”

My Blood Boils: The Mass Murdering Regime lives down to its name » « Slow Down: Estonia tries a new way of curbing speeders