The venerable typewriter is now 150 years old, depending on what you consider its key moment of invention and development.  (Regarding the title, should that be putting up words, since some typewriters use upstrike?)  There are older typing machines than that, but it was the Sholes and Glidden design of 1867 which became the standard, first mass produced in 1868 (although many improvements came later, e.g. lower case text).

Typewriters changed the workplace, changed literature, changed education.  They produced writing that was more legible and faster to produce than handwriting could ever be, allowing writers to express themselves at speeds never before possible with less effort.  (The less laborious work is, the faster and more willing people are to do it – and do more of it.)

The typewriter has also had major impact on the change of language, not just what was written.  For alphabetic languages (Latin, Cyrillic, Hangeul, et al), a 1:1 keyboard assignment was feasible.  For character based languages like Chinese and Japanese, it posed a major problem.

Typewriter historians credit Lin Yutang not just as the inventor of the Mandarin typewriter but also the inventor of predictive text. He placed commonly used characters near each other to make phrases and combinations much easier. He also simplified the organization of Chinese language characters by number of strokes, making it easy for users to find them.

Sugimoto Kyota, inventor of the Japanese typewriter, had a major impact upon his language. Prior to the 20th century, Japanese students learnt upwards of 10,000 kanji (Chinese characters). He chose to limit his typewriter to 2,400 characters he deemed most important (for government, business and legal use). Today, Japanese students still learn about 10,000 kanji, but only about 2,000 are used in everyday life, most of those selected by Sugimoto.

South Koreans still learn thousands of hanja (Chinese characters) and read newspapers written with them.  But in everyday life, only the Hangeul script is needed for school, government or business.

Myself, I hate predictive text and never use it because (a) it rarely chooses the word I want and usually inserts the wrong one, and (b) it uses american spellings.  No thanks.

Is predictive text robbing us of our ability to write?

In China they call it character amnesia – being unable to recall how to write a phrase because you’re so used to autocomplete software. Now it is on four billion phones, and children type before they write, will we still be able to put pen to paper?

Who Used And Still Uses Typewriters?

Nearly all famous writers of the 20th century used typewriters (because there were no computers and writing by hand is laborious).  Their use by novelists dates back to the 19th century.  But even writers today do not always prefer computers.  J. K. Rowling wrote her earlier Harry Potter books with pen and paper.

Typewriters are still widely used today around the world.  In US prisons, typewriters are valued by prisoners and only rarely misused, producing legal documents, personal writing and some unapproved uses (e.g. gambling chits).  Agencies and businesses which still do paper forms and data entry use typewriters.  Many US police departments still fill out reports with typewriters.  And in many offices, typewriters remain in use because they are durable.  Electric and mechanical typewriters as old as 1950 (made by IBM, Smith-Corona, Underwood and many others) are still in use and need only occasional repairs.  And no matter how many times the naysayers say nay, India’s street typists are still busy.

Does Anyone Still Make Typewriters?

As the saying goes, reports of its death have been greatly exaggerated.  As have claims of the “world’s last typewriter factory shut down.”

The US company Swintec produces electric typewriters with clear plastic cases to prevent smuggling and hiding of contraband.  (Other common prisoner possessions are now made with plastic cases for the same reason.)  Depending on the prison and state, typewriters can have memory up to 128K are permitted.  I want one.

Nakajima of Japan continues to produce electric typewriters, which are sold by multiple vendors.  I cannot confirm whether IBM and Brother still produce typewriters, but several vendors are selling new, unused stock, not just refurbished units.  Typewriter repair businesses have also seen a boom in revenues over recent years.

If you do decide to buy a new typewriter, avoid brands like Olympia, Royal and American Crafts Typecast which have appeared in recent years.  Their made-in-China build quality is beyond poor, sometimes not working even when new out of the box.  Swintec, Nakajima and others outsource the labour and construction from China, but large customers like make for better quality control.

Why Use A Typewriter Today?

Many people are returning to the typewriter for a multitude of reasons, and being a “hipster” is not one of them.  Typewriters offer multiple advantages over computers:

A typewriter is worth possessing today as an emergency or secondary piece of writing equipment, even if just to free yourself of gadgets.  I use a typewriter regularly for several reasons:

The Typewriter Database will help you identify models and their year of construction.  The Office Museum catalogues the typewriter and many other 20th century office machines.  Richard Milton’s Portable Typewriters presents his collection of antiques.

Richard Polt of Xavier Univerisity wrote The Typewriter Revolution: A Typist’s Companion for the 21st Century, a paean and love letter to the typewriter, showing why it still has value now and in the future. Also visit Polt’s page on typewriters with essays from himself and others (including me!).

Do Typewriters Have Any Value As Antiques?

Is the pope Argentinian?

Here’s a high school graduate in the US who runs a brisk business.  A man appeared on a New Hampshire business news program displaying his extensive and valuable collection, including one from 1890.  In 2016, a man began selling his collection, estimated to be worth US$100,000.  Typewriters belonging to famous writers have sold at auction for as much more.  Cormac McCarthy’s typewriter sold for US$254,000 back in 2009.

Are There Any Typewriter Fonts?

There are literally scores of free typewriter fonts available, both monospace and proportional (sacrilege!) which will work on most operating systems.  Here are a few sources:

Among many others. I prefer monospace Courier fonts for legibility and for the ease of lining up text without complex tabs in word processors.  Along with fonts, creative people have created utilities allowing typewriter sounds as you work on your computer:

Online, there is Overtype, the “over-the-top typewriting simulator”. 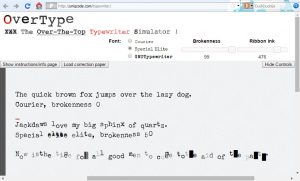 Even if you can’t or won’t get a typewriter, distraction free editing is possible.  (Yes, I know Vim exists, and so do many others.  That’s why it’s omitted.)

Write Monkey v2.7 is a full screen editor covering everything, including the taskbar, leaving no distractions. Language packs exist and can be downloaded.

Can Typewriters Be Used Other Than To Write?

Typewriters have also been used for art, producing fascinating and wonderful results.  And it’s not just limited to poetry or literature.

A Short History Of Typewriter Art.  Most people assume character art began with ASCII art in the 1980s, with emoticons.  But the history of typewriter art goes back a century. 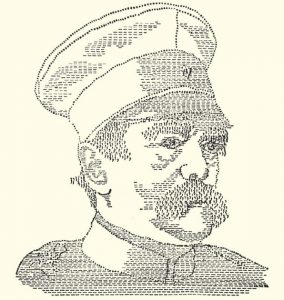 Paul Smith is (was?) a Typewriter Artist.  He was 90 when filmed in 2004.  Aside from his obsession with religion, his story is fascinating.

The Boston Typewriter Orchestra is a collective of professional musicians and non-musicians who perform composed pieces, played solely on typewriters. Unfortunately, the machines do not last many performances in their hands.  Great Big Story profiled the BTO, and here is video of the BTO performing “Typeout”, a take on The Surfaris’ classic, “Wipeout”.

Last and far from least, is Leroy Anderson’s composition, “The Typewriter”, written in 1950 to both great comedic and artistic effect.  At first a novelty, it has become a staple of many orchestras and a fan favourite.  It’s a rare time when percussionists get to play centre stage in an orchestra.

And If That’s Not Enough To Convince You…

The typewriter is not dead.  Witness how alive the culture of type still is:

The typewriter is making a comeback with a new generation of fans gravitating to machines that once gathered dust in attics and basements.

Youtube: “Why I Love My Typewriter (And Why You Should Get One!)” – a teen talks about his typewriter.

Youtube: “Buzzfeed: People Try A Typewriter For The First Time”

Quinta Brunson: “Old people are like, ‘These kids with their tweets, they think every thought they have is golden.’ Yeah, that’s because back in the day you had to make sure that thought was golden before you wrote it down.”

And just for fun, some short films on youtube:

“Typewriter of the Gods”