Disclaimer: I’m aware the CollegeHumor article is a bit old. But I only saw it recently.

LOL! So check these silly women who think they’re nerds cos they wear glasses. Ha, what fakes! Let’s take Tweeted pics and make an article mocking them for thinking they’re nerds! 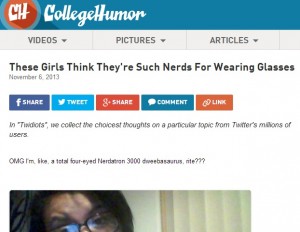 We’ll show these dumb womin that it’s wrong to call yourself a nerd because… well, because! It’s too difficult to explain and if I have to explain then you’re obviously not a true nerd. And who doesn’t want to aspire to be a self-loathing, hateful, vengeful manchild — I mean “true nerd”?

What you mean let people call themselves what they want because it has no fucking impact on my life? That makes no sense! I must defend the kingdom of nerdom if people aren’t nerding in the perfectly right way that I’ve arbitrarily determined! Dammit! People can’t just enjoy themselves: they need to enjoy the things I love in the right, special, sacred way I’ve determined!

This is for men. When you come in here, with your women parts, it upsets the balance. And that’s wrong because… you know. Because it is upsetting! Stop it, just look at that list and laugh at those silly women that deserve to be shamed on a widely read site for doing a harmless activity!

Hey! We mock men, too, so it’s fine! Things are equal! How come feminists always talk about how people are equal but then when they get targeted they want special treatment??! Huh: What you mean recognising the world is unequal doesn’t negate treating people equally? That makes no sense. Women are just being hysterical as usual! They should get over themselves, they just need a man in their life.

Everything is fine and I’ve never seen or experienced an environment that constantly judges and negates me for my sex, race, sexual orientation – THEREFORE IT DOESN’T HAPPEN TO ANYONE ELSE. That’s logic! And I should know, bro, I’m a totes true nerd! Let’s go be offended by Star Wars…