It’s called “Hello Kitty” by one Avril Lavigne. I believe she’s famous for having trouble with skateboarding children, who she would see at a later point?

So, the music video starts off with this young woman speaking with a thousand voices in Japanese and pointing at me. 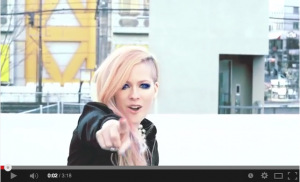 Why is she pointing?

I don’t know what I did, but she’s quite excited.

Then she’s morphed into a room accompanied by disapproving, silent Japanese ladies. This will be their face and general demeanour throughout the entire parade of American teen-pop diabetes-inducing shitstorm the video is. 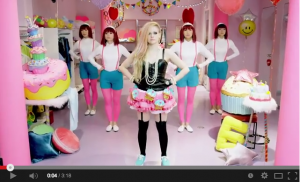 The colours made my eyes crawl inside my skull to die in pleasant darkness.

Then the music skips tragically on her saying “Ka”, so she says, “ka-ka-ka-kawaii“. And that’s when my brain shook its head, put on its hat and left via my nostrils. It knew the actual music would start. 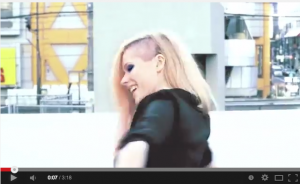 SPIN FOR NO REASON, AVRIL! SPIINNNNN!

She plays a guitar which apparently contains the trapped soul of Skrillex. 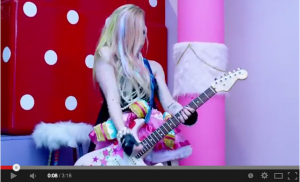 Help! I’m trapped in the body of a shittily programmed guitar!

Then she does this weird… “dance” thing?

What is she holding? Why is she now wearing candy spectacles? Why is she dancing with that… thing? It looks like the Staypuff Marshmellow Man’s aborted child.

KEEP YOUR EYES ON IT, AVRIL! 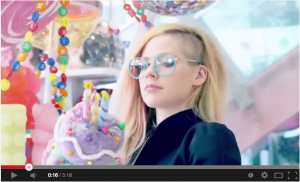 And on it goes.

This blistering, glittery-nailpolished middle finger to music; this blackboard scraping called vocals; the music sounds like the someone throwing a small angry police car around. It’s not so much music as it is glorified white noise, allowing this pop-star to use the colour palette of Candy Crush as a weapon against common decency.

And where the fuck is she? It’s like a racist’s fever-dream of Japan, after taking too much LSD. Everything looks like it takes place in Willy Wonka’s sweatshop.

This would, of course, be nothing without the lyrics. WITNESS THESE GRAND POETICS TO MAKE EVEN DANTE ALIGHIERI WEEP.

Every silly kitty should be

My thoughts correspond with the notes above:

1. Where is your mother?

2. It’s not night-time at all in this music video.

5. OK, now I don’t know what you mean by slumber party. Is this only something “fat kids” can do? Do thin kids not enjoy Smarties?

6. Dear god, who else is at this daytime event where you slumber party that “someone” must throw dessert at you? Won’t your poor mother on her night duty have to clean up?

7. OK, now I’m convinced there’s more than one other person at your day-time event.

8. But now this reads as though no one other than the person you’re singing to is there. Who else would the bottle spin toward? I’ve never played, but I did see attractive people play it in high school.

9. Wait, is spin the bottle finished?

This bizarre explosion of “culture” has some racism going for it, too, with its portrayal of everyone who isn’t the white American woman as mindless Japanese drones. So yay for integration. Or whatever.

Whoever decides whether humanity should continue or die will surely be yearning to push the red button after hearing this – because afterward they won’t be able to hear anything else like “Please, no!” Imagine we sent this off as part of a collection that constitutes who we are as a species; imagine intelligent aliens found it. I think it would be immoral for them not to destroy us, as the sound of a cat getting its tail stepped on screeches lyrics about bottle-spinning and day-time slumbering partying. If you’re not diabetic after this, I admire you: the twee and candy-coloured hatred for all things humanity has built in its long march away from oppression makes avoiding sickness difficult.

But whatever. Don’t watch it. Just know it exists. And I watched it for you because I’m apparently a masochist.