Just as a way to make it easier to not read the triggery content, I’m putting it below the fold, and below this meme I made for tumblr that NOBODY REBLOGGED.  ;_; 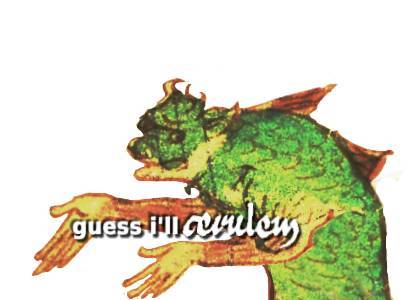 PREMISE:  I imagine IRL a non-zero number of the murderers of transwomen are shitty chasers who want to destroy the source of their shame.  Like, “I want to have sex with you but then I must burn the evidence.”

A trans lady sex worker has a tense life, supporting her girlfriend through medical school, with her job navigating the twisted feels of some of her patrons.  She has close to perfect judgment on which clients are too risky, but all it takes is one slip up, and on a bad day, she has one.

The guy is a famous actor, hollywood conservative tough guy.  She sees the red flags but chooses to ignore them, lets him take her to an isolated place.  She rises from the dead there and comes home.  Her GF helps diagnose her condition – u ded, girl.  How long can you stave off decomposition and what are you going to do with your second shot?  GF does not like her plans and tearfully they break up, but they stay in touch.

She corners the guy at a club and uses the fact that he killed her to get past his crew and his defenses, but instead of offing him right then, she tortures him mentally.  She publicly announces they are dating, threatening to out him for the crime if he says otherwise.

The guy has career mayhem.  His agent and the usual studios dump him, but LGBT projects start beating down his door, people wanting interviews and book deals.  None of that pays enough to support his lifestyle – to pay the taxes on his mansion – and he starts to lose it all. He still pretends to go along with the act in public, while whenever they’re behind closed doors, she torments him with his crimes, waves her mortal wounds in his face, fucks up all his nice things, makes him watch as she scrolls through media on his big screen TV reading all the nasty things people say about him.

Finally he snaps and tries to kill her again.  Big fight.  She gets him to kill her in public and he goes to prison.  No more love from the LGBT community, no love from bigots either.  The GF cannot get into her funeral which is attended by thousands, watches the crowd from a hill.  The chaser spends the rest of his life reviled and alone.

HORROR ELEMENT:  All kinda bad stuff here.  This would be a very unpleasant story.

I can see lots of problems with this one, but the biggest, in terms of successfully making the point, is that her torments of the murderer have to somehow not overlap with fetishes – and motherfuckers got fetishes for every kind of humiliation you can imagine.  How it’s presented or framed can make a difference, but I’m not sure it’s worth the effort.  Still, all this has to be is a concept – not a final product – so I’m OK with that.

PREMISE:  I wanted to do something very visual and hip for revenant, and that didn’t happen, so this one concept will be superficial as hell.

Deborah and Heather were modern witches.  Maybe their magic nudged a relationship this way or that, boosted somebody’s confidence or fertility, but they could never do magic beyond what could be chalked up to coincidence – until they met each other.  Together they figure out how to make spells of exchange with bold supernatural effects – all around the theme of trading one thing for another.

Deborah is 67 and Heather is 43.  The first thing they trade is the age of their faces.  Heather gets a crone face and Deborah gets a face with youth at odds with the rest of her body.  They are both profound weirdos and think that’s fun, so they don’t trade back.  Deborah is a flower child type witch, with sun dresses and her wrinkly arms draped with turquoise, silver, and beads.  Heather is a tradgoth who makes up her crone face like Siouxsie Sioux and wears fake black flowers as ornaments at her hair, wrists, and boots.

They try to help people with their powers, but also indulge in some crimes.  None of it goes quite as planned and the mayhem leads to the Portland PD going to burn them at the stake.  The people love them anyways and have gathered to counter protest.  The switchy witches exchange the police riot gear with the counterprotestors nalgene bottles and homemade signs and the cops are beat.  They live happily ever after.

HORROR ELEMENT:  The switchy witches are spoopy ol’ birds up to no good.  This is admittedly more halloween than horror.