I will occasionally be posting for my guest blogger. He doesn’t want a wordpress account so he won’t be making these directly, but I’ll label them as “Guest Post” and put his blurb at the bottom. 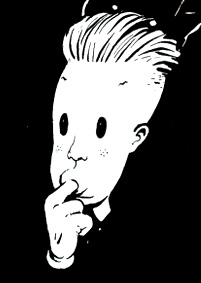 I told G.A.S tonight that I shouldn’t be allowed to listen to the Pixies with my headphones on. Invariably, I will slowly turn up the volume until it’s maxed out and my brains are dribbling out my ears. This is something unique to this band, and whatever hearing loss I have now I blame entirely on them. It must be some arcane musical wizardry, along with the way their songs always seem to end too early, no matter how many times you listen to them. I liken this phenomena to that of Carmex lip balm.

Once in middle school an outbreak of Carmex addiction hit the seventh graders hard, I among their sad, chapped numbers. If you were unfortunate enough to leave your denim jacket on the back of a chair, you’d come back to parched junkies digging through your pockets for a dip into that little yellow pot. Many the Trapper Keeper and Peechee were edged in medicinal grease after a tube released all over the bottom of a backpack.

I went cold turkey, and to this day I yearn to feel that uncanny burn on my lips. Snopes claims this is a hoax, but they’re obviously in the pocket of big balm. So, I say that the Pixies are the Carmex of music, damaging to your physical health but delicious and addictive. But I ain’t giving that shit up, and they never ruined any stationery.

G.A.S. told me to write this as a blog entry, so here it is as introduction to me, the Beast from Seattle. I’m a big-time lurker so I normally never comment anywhere or even as much as write on Facebook. I wrote a term paper defending lurkerdom, but I will fight my natural tendencies and write something here once in a while. About me: I was born in the ’80s, am a big queer goth weirdo, and the kind of person who’ll break their keyboard trying to get every last cat hair out of it.