Christina Hoff Sommers is still making videos for the American Enterprise Institute sniping at people who argue that there is sexism in video games. She made a new one on Monday, with a partial transcript.

“Is Gaming A Boy’s Club?” is the name of a school lesson plan developed by the Anti-Defamation League—ADL for short. The ADL is a well-respected organization that has fought anti-Semitism and racism for decades. As a long-time admirer of the ADL, I am baffled by its sponsorship of such a biased and dogmatic curriculum. The lesson plan advertises itself as meeting standards for inclusion in the Common Core—an influential national curriculum. The entire lesson plan is dedicated to the proposition that video games are a hotbed of sexism and misogyny, and it gives students the message that anyone who dares to suggest that games should be more inclusive can expect to be terrorized by malevolent gamers.

And that message is completely wrong and contrary to the truth because – no actually Sommers doesn’t say why. She can’t very well, can she, because the message is not wrong and contrary to the truth. Women who talk about sexism in gaming are likely to be terrorized by malevolent gamers, unless they do that talking solely in private. Sommers must be relying on some mental reservation or quibble about wording to make her claim somehow true. Maybe because not all critics can expect to be “terrorized”? Maybe she carefully chose that word because not all gamers resort to threats? Maybe she knows perfectly well that anyone who dares to suggest that games should be more inclusive can expect to be verbally harassed and abused, and chose “terrorized” for better deniability? Me, I would say “terrorized” can include verbal harassment and abuse, but then I’m the kind of person Sommers sneers at, so there you go.

Lesson materials include a video and an article by feminist critic Anita Sarkeesian—both are harsh indictments of the world of gaming. That would be fine if she were not the only assigned author. In another part of the lesson plan, the teacher places seven posters around the room—each bearing a statement about video games. Students are then told to attach Post-Its to those they agree with. Three are neutral—for example: “I have played video games” and “I have watched other people play video games.” But four are affirmations about sexism: “I have witnessed sexism in video games,” “I believe video games can perpetuate sexism.” None says anything positive about games—such as, “Gaming is an exciting activity for both women and men,” or “Sexism in video games is exaggerated.”The curriculum also includes a small group discussion on sexism and video games and “additional resources” that focus on—guess what?– harassment, misogyny, and terror in the culture of video games. The curriculum is not only obsessively one-sided—much it is false, misleading, or exaggerated. Let’s start with the very first sentence. “Video games do not have a good track record when it comes to positively including girls and women.” But on page 3 of the curriculum students learn that women now constitute 48 percent of video game players—up from 40 percent in 2010.

Note the word now. Then note the preceding phrase track record. See what she did there? The curriculum starts with “Video games do not have a good track record” and Sommers contradicts with “It’s improved.” But the fact that it has improved (assuming that’s true) doesn’t contradict anything about its track record.

What I hate most about this crusade of Sommers’s is the way it says “No no no don’t look under the surface, don’t point out things that everybody ignores, don’t say this cultural habit doesn’t have to be like this – LEAVE THE STATUS QUO ALONE.”

It was depressing to see Steven Pinker RT the Sommers video. 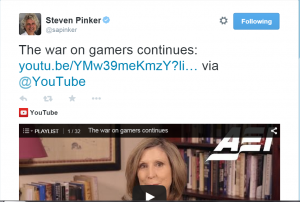