The BBC has more on the destruction of Nimrud.

IS began demolishing the site, which was founded in the 13th Century BC, on Thursday, according to Iraqi officials.

The head of the UN’s cultural agency condemned the “systematic” destruction in Iraq as a “war crime”.

IS, which controls large areas of Iraq and Syria, says shrines and statues are “false idols” that have to be smashed.

“They are erasing our history,” said Iraqi archaeologist Lamia al-Gailani.

They really aren’t “false idols” now; they’re ancient artifacts. They’re history, they’re art, they’re mythology, they’re archaeology, they’re anthropology, they’re part of the rich exciting story of human creativity. They don’t have to be smashed. There’s no human need that smashing them meets. Smashing them is a power move. IS is all about power for a few male fanatics to force all 7 billion of us to live in a bare theocratic hell.

Nimrud lies on the Tigris river, about 30km (18 miles) south-east of Mosul, which IS controls.

Many of the artefacts found there have been moved to museums in Baghdad and overseas, but many remain on site.

BBC Middle East correspondent Jim Muir says the attempt to destroy Nimrud is already being compared with the Taliban’s demolition of the Bamiyan Buddha rock sculptures in Afghanistan in 2001.

Don’t forget the tombs in Mali. 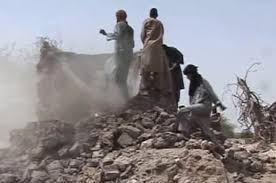 At the North West Palace of Ashurnasirpal » « Goodbye to Nimrud