The BBC is still at it. This must be a deliberate policy, not mere laziness or habit.

It’s at it in a story on what the Danish domestic intelligence agency knew about El-Hussein. Prison officials told them he was at risk of being radicalized. I would guess they are told that about a lot of people, and can’t closely monitor all of them.

Danish intelligence chief Jens Madsen acknowledged that El-Hussein had been “on the radar” of his services.

Mr Madsen said investigators were working on the theory that he could have been inspired by the shootings in Paris last month.

Lars Vilks told AFP news agency that police “did not step up security on Saturday. It was the same as we had previously”, confirming that he had since gone into hiding.

The cartoonist stoked controversy in 2007 by drawing pictures of the Prophet Muhammad dressed as a dog and has been under police protection since 2010.

There they are, at it again – firmly blaming Lars Vilks for drawing a cartoon that in just about any other context would be simply a cartoon, like any other. There they are again, dishonestly and damagingly saying that Lars Vilks “stoked controversy” when he simply drew a cartoon. 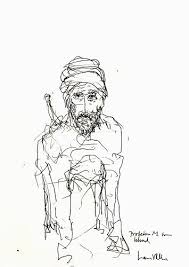