Here’s an example of the kind of thing that the statement Richard Dawkins and I posted last week opposes.

John ‏@JohnTheSecular
So tell me, @RichardDawkins, what is “modern art” the result of, then? Your fuckwittery? 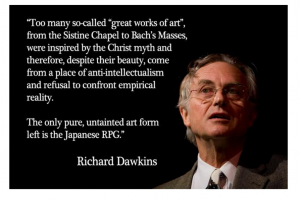 Description: it’s a photo of Dawkins talking next to a passage in quotation marks:

“Too many so-called ‘great works of art’, from the Sistine Chapel to Bach’s Masses, were inspired by the Christ myth and therefore, despite their beauty, come from a place of anti-intellectualism and refusal to confront empirical reality.

The only pure, untainted art form left is the Japanese RPG.”

That’s a shitty trick because it’s too plausible and people are passing it around and taking it seriously. It looks real. It’s not marked as satire.

Stamp out all the things » « The curse of knowledge