There’s more from the incompetent unresponsive unrepresentative “Global” Secular Council. I hope this will be my last post on the subject (of this particular quarrel, not the Council overall), but who knows – they keep adding to their CV. 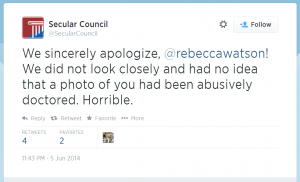 In itself, of course, that’s good – an apology was owed. But they refuse to apologize to me, so offering an energetic apology to someone else for a small part of the very thing they should apologize to me for…looks pointed.

Item: they still refuse to apologize to me.

Here is how our correspondence on that subject went:

We are sorry we called @OpheliaBenson “Ofie”.

If so, I will have staff implement promptly.

“We apologize” would be better than “We are sorry.”

For the rest, it’s a grudging ungenerous minimum, but if you want to look grudging and ungenerous, go ahead.

My reply this morning some 14 hours later:

This is ridiculous. That’s a ridiculous question. It’s not a matter of “the account” – it is your organization. The account isn’t a separate thing; it speaks for your organization, and your organization is accountable for what it says. You’re the press contact person. If you can’t figure out how to apologize for grotesque rudeness, you have a problem.

We sincerely apologize, @rebeccawatson! We did not look closely and had no idea that a photo of you had been abusively doctored. Horrible.

We are sorry we called @OpheliaBenson “Ofie”.

It’s pretty staggeringly rude, isn’t it. You can almost see the sullen defiant child, delivering the forced apology as rudely as it dares and longing to blow a huge raspberry instead. And the press contact officer thought it a good idea to offer me that.

Item: they blocked @VitaBrevi too.

She was asking them questions, so they blocked her.

How, exactly, are we supposed to go about asking them questions? Do we have to petition them? Go through channels? Pay a bribe? Disable the guards? What?

I’m serious here. They seem to think they don’t have to answer questions, so much so that they can malign and taunt and silence people who ask them questions. That is a very peculiar and sinister position for a secular non-profit to stake out.

Tell us more, more, more » « Only if there’s due process