Maajid Nawaz is furious at the Guardian for the way it worded its reporting on the kidnapped and enslaved Nigerian schoolgirls. 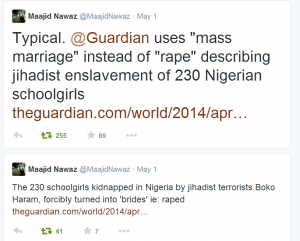 Furious. @guardian cannot even call it enslavement & rape but calls it “mass marriage”? Has our cultural relativity gone that far?