A different set of battle-lines…The Guardian reports via the AP in Delhi:

An Indian diplomat said US authorities subjected her to a strip search, cavity search and DNA swabbing following her arrest on visa charges in New York, despite her “incessant assertions of immunity”.

The case has sparked widespread outrage in India and infuriated the New Delhi government, which revoked privileges for US diplomats to protest against the woman’s treatment. It has cast a pall over India-US relations…

Devyani Khobragade, India’s deputy consul general in New York, was arrested on Thursday outside her daughter’s Manhattan school on charges that she lied on a visa application about how much she paid her housekeeper, an Indian national.

Prosecutors say the maid received less than $3 (£1.80) per hour for her work.

The “widespread outrage in India” is apparently all for the diplomat, none of it for the maid who was paid less than half the minimum wage. Hmm.

In an email published in Indian media on Wednesday, Khobragade said she was treated like a common criminal.

“I broke down many times as the indignities of repeated handcuffing, stripping and cavity searches, swabbing, in a holdup with common criminals and drug addicts were all being imposed upon me despite my incessant assertions of immunity,” she wrote.

Oh, like a common criminal, as opposed to like a rich person who paid her servant poverty-level wages.

Khobragade’s case has touched a nerve in India, where the fear of public humiliation resonates strongly and heavy-handed treatment by the police is normally reserved for the poor. For an educated, middle-class woman to face public arrest and a strip search is almost unimaginable, except in the most brutal crimes.

Prosecutors say Khobragade claimed on visa application documents that she paid her Indian maid $4,500 a month, but that she actually paid her less than $3 an hour. Khobragade has pleaded not guilty and plans to challenge the arrest on grounds of diplomatic immunity.

Marie Harf, the US state department deputy spokeswoman, said Khobragade did not have full diplomatic immunity. Instead, she has consular immunity from the jurisdiction of US courts only with respect to acts performed in the exercise of consular functions.

Oh gee, so underpaying her servant and lying about it on visa application documents isn’t part of the exercise of consular functions? Who knew.

Funny thing: I read about this via Priyamvada Gopal’s Twitter feed. On this subject, I like her take. 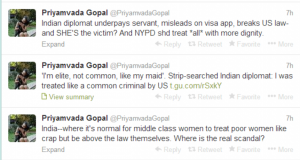 India–where it’s normal for middle class women to treat poor women like crap but be above the law themselves. Where is the real scandal?

‘I’m elite, not common, like my maid’. Strip-searched Indian diplomat: I was treated like a common criminal by US http://t.gu.com/rSxkY

Indian diplomat underpays servant, misleads on visa app, breaks US law- and SHE’S the victim? And NYPD shd treat *all* with more dignity.