Now Elan is all pissed off at people who don’t think his bullying of a somewhat rude passenger was the wittiest and most richly-deserved schooling ever. 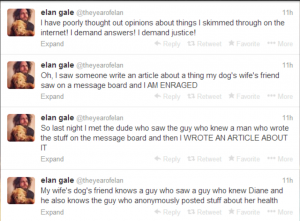 Oh, I saw someone write an article about a thing my dog’s wife’s friend saw on a message board and I AM ENRAGED

I have poorly thought out opinions about things I skimmed through on the internet! I demand answers! I demand justice!

[and one more not in the screengrab]

Everyone feels one way! I AM SMART AND MUST FEEL ANOTHER WAY IMMEDIATELY!

It’s funny how easily one could just turn that line of thinking around on him:

Oh, I saw some woman on my flight being crabby about the delay so I KNEW she’s a horrible entitled bitch and I had to FIX HER IMMEDIATELY

Everyone feels that bullying strangers into better behavior is just bullying. I AM SMART AND MUST FEEL ANOTHER WAY IMMEDIATELY!

Update some hours later. More bitter tweets about how misunderstood Elan is. 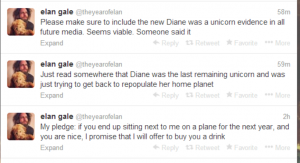 My pledge: if you end up sitting next to me on a plane for the next year, and you are nice, I promise that I will offer to buy you a drink

Please make sure to include the new Diane was a unicorn evidence in all future media. Seems viable. Someone said it

In other words the cancer claim may be bogus. Sure, it may. The bullying was still bullying, even if Diane is as healthy as a mountaineer.